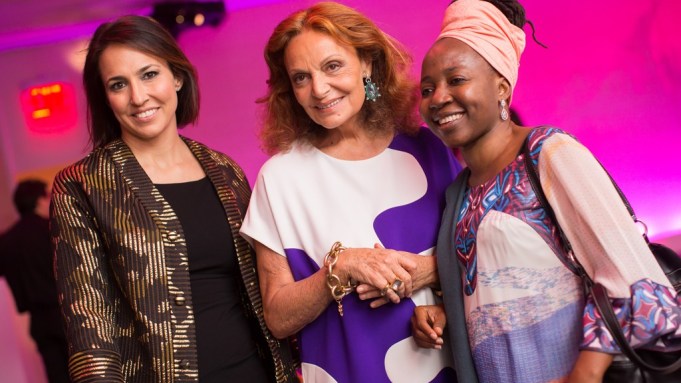 The evening’s program read “an evening to honor extraordinary women” — and it was just that. Award recipients included Cameroonian political leader Kah Walla; Israeli community leader Liron Peleg-Hadomi and Arab educator Noha Khatieb, and Veronika Scott, founder of The Empowerment Plan, which employs homeless women, teaching them how to produce weather-resistant coats that transform into sleeping bags. Alicia Keys was given the Inspiration Award for her philanthropy work in the fight against HIV/AIDS.

The night’s biggest honoree, though, was Gloria Steinem, who arrived in a floor-length black skirt embellished with an elephant-adorned chain belt. “Isn’t it great?” she said during the step-and-repeat, lifting up her skirt to reveal a pair of studded boots. Steinem had just celebrated her 80th birthday last week. “I have to live for another 20 years because I can’t finish my writing deadlines,” she said.

In addition to the roster of nominees, von Furstenberg called upon an equally impressive group of presenters: Sarah Jessica Parker, Chanel Iman and Tina Brown, whose Women in the World Summit ended the next day. Meryl Streep was scheduled to present to Steinem, but called in sick at the last moment (von Furstenberg herself stepped in).

The event officially kicked off with a three-song set by Estelle. The singer worked the crowd — a mix of Leigh Lezark, Natalie Joos, Jessica Joffe, Lauren Bush Lauren and Elizabeth Gilpin — goading them to get on their feet and sing along.

Following the performance, von Furstenberg took the stage to give opening remarks. “You have humbled me with your character and your resilience,”she said, after naming the honorees. Keys, clad in a cobalt DVF jumpsuit, was equally inspired. “I’ve already written three songs on the back of my program,” she laughed.

The evening capped off with Steinem’s speech, during which the subject of her 80th birthday came up once again. “People say, ‘Oh, you’ve sacrificed so much, now’s the time to do something for yourself.’ I mean, please — that is so wrong,” she said. “I don’t think I’ve sacrificed one f–king thing.”