A night of much mischief and good-natured raillery among the assembled designers, models, editors, actors and music stars. 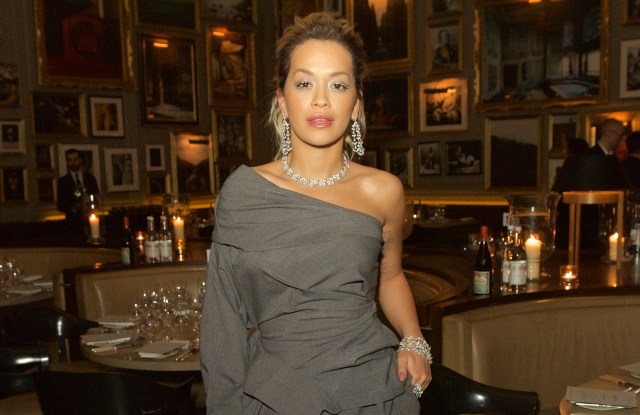 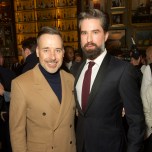 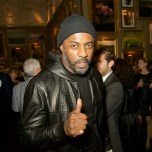 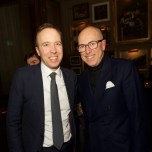 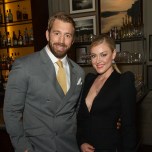 The grand dining room of the Berners Tavern at the Edition hotel in London, with its ornate stucco walls covered in gilt-framed paintings and photographs, was the backdrop against which the seasonal London Fashion Week Men’s closing dinner played out, with much mischief and good-natured raillery among the assembled designers, models, editors, London’s men’s wear ambassadors, artists, actors and music stars.

Jack Guinness was up to his usual brand of mischief. “Oh, I’m having a wonderful time now,” he confided cheekily. “I thought I’d make things interesting, so I’ve just been sneaking up behind people and whispering the filthiest sorts of things in their ears.”

One of his victims, model Oliver Cheshire, was at the pointy end of a ribbing about his silk shirt from Andrés Velencoso. “Why am I getting so much s–t about my shirt?” asked Cheshire in outrage. “Everyone has been teasing me about it, until I tell them it’s Dries Van Noten, then they’re all, like, ‘No, actually, I like it.'”

“I was in Buenos Aires for five months, filming for ‘Edha’, the first Netflix Original show to be produced in Argentina,” model and actor Velencoso told WWD. The show centers around a young fashion designer and has been billed as a suspenseful drama set in the fashion industry.

“It’s about a fashion designer and all things that happen to her — revenge and secrets. I play an immigrant who comes to the city and gets in touch with the company, eventually working there in [a junior job] then becomes something more in the business.” It’s a role for which Spaniard Velencoso, who has fronted campaigns for Cerruti, Massimo Dutti and Salvatore Ferragamo, has the perfect CV. Spoiler alert: though he dodged further questions about his character in the series (“I don’t want to spoil it for you”), he’s playing a dishy male model who turns fictional designer Edha’s world upside-down, according to Netflix.

Scottish rugby player-turned-actor Craig McGinlay may also be on Netflix watchlists soon, if rumors are to be believed, reprising his role as a handy-with-a-sword member of King Arthur’s inner circle in Guy Ritchie’s testosterone-fueled action film, “King Arthur: Legend of the Sword.”

The film underperformed at the box office but saw strong download and DVD sales, and sources suggest that Netflix may be considering picking up where the story left off to produce two remaining sequels. “A lot of critics were upset that there was no Merlin or Guinevere in the first [film], but were planning to introduce them in the next film,” McGinlay explained. “It would be great if Netflix or Amazon Prime Video picked it up. I really think streaming services are the future.”

Model and chef Isaac Carew also has big plans for the New Year. “I started modeling quite late, when I was 22, and have realized that I want to get back into my first love, food, because modeling is not going to last forever and I need to do something I love, so I have written a cookbook called ‘The Dirty Dishes,'” said Carew, who, like his father and grandfather, trained as a chef and has worked under the likes of Angela Hartnett.

“It’s a big ‘f–k you’ to the whole healthy eating thing that’s going on at the moment,” he explained. “You don’t need to restrict your diet to be healthy. All this restriction makes people miserable and unhealthy. I put black pudding in my salads.”

Former Royal Ballet soloist Eric Underwood, who set his ballet shoes aside last year, has set himself a more prosaic task for 2018: learning to drive. “It’s so hard,” he confessed. “The other day, by Camden Lock, I’m in the car with the instructor, he’s telling me to make a right, and I just see all these cars coming at me, [there are lots] of gears to shift, I’m sweating and stressed out, to the point that I just stopped the car in the middle of the street and said, ‘Look, we have to switch. I am in over my head here.'”

GQ editor Dylan Jones co-hosted the lively dinner with Rita Ora, paying tribute to men’s wear codes in a one-shouldered gray flannel ensemble, who will be reprising her role as Mia Grey in the next installation of the “Fifty Shades of Grey” franchise, due to be released next month.

During his speech, Jones saluted the “many people responsible for four days of some of the most magnificent creativity we’ve seen in this country for a very, very long time, proving yet again that London really is the crucible of talent and is the most important fashion city in the world, full stop.”