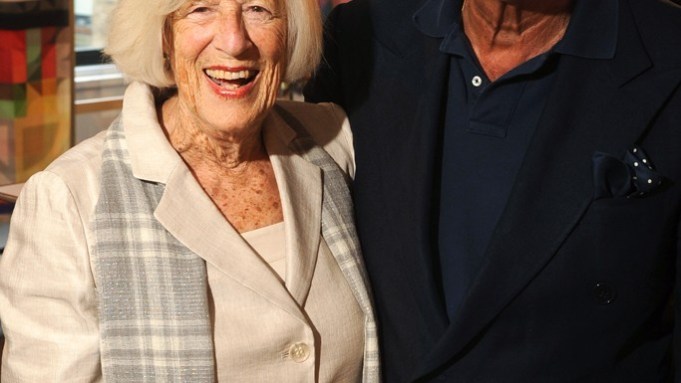 “Scarves are a whole other world.”

So said Jerry Lauren, who oversees men’s creative for Ralph Lauren, as he stopped by the Echo Design Group Tuesday night to help the scarf company celebrate its 90th anniversary.

The family-owned business, which was founded by Edgar and Theresa Hyman on their wedding day in 1923, turned its Manhattan showroom into party central, inviting customers and friends in to commemorate the milestone. Dorothy Hyman Roberts, chairman and daughter of the founders, who has worked for the company for 63 years, could barely take a sip or munch an hors d’oeuvre as guests flocked to her side.

That included Jon Spector, head of the Conference Board and an Echo board member, who teased her that she was really the one who started the company when she was 30 and she looked really good for 120 years old.

Steven Roberts, Dorothy’s son and chief executive officer, marveled that his mother was still active and as sharp as ever. “She doesn’t come to work on Fridays, but she shops the stores on Fridays and e-mails us with everything she’s seen,” he said. “She’s really a mentor to everybody and is truly inspirational.”

Former Bloomingdale’s and Hudson’s Bay Co. executive Jeff Sherman was also in attendance. Sherman said he was lured out of retirement by Steven to join Echo as president. He said Steven was out walking his dog and spied him riding a bike, they chatted and Roberts asked him to come on board. “He told me to help make this company bigger than it was,” he said of Echo, which also produces women’s cover-ups and swimsuits as well as bags and home goods. “You don’t get a lot of companies that are 90 years old or a lot of families that have run the same company for 90 years, but there are not a lot of families like this. It’s a real feel-good story.”

Lauren, who said Echo holds the company’s scarf license, said he’s seen the evolution of scarves over the years, particularly for men. “When I started, it was just paisleys or cashmeres, but now men are wearing scarves every minute of the day. They’re wearing cotton and linen, crinkled tartans and tie-dyed patterns.”

More than 160 people showed up at the party, including Macy’s chief Terry J. Lundgren and Bon-Ton ceo Brendan Hoffman. Lynn Roberts, vice president of communications for the company and Dorothy’s daughter, said Echo had debated whether to rent a space for the event, but opted to just have it in the showroom instead. “We decided it would feel warm and cozy to do it in our offices,” she said. It also allowed the company to show off some pieces from its spring collection and the four “iconic Echo prints” that were produced for bags and scarves to commemorate the anniversary.