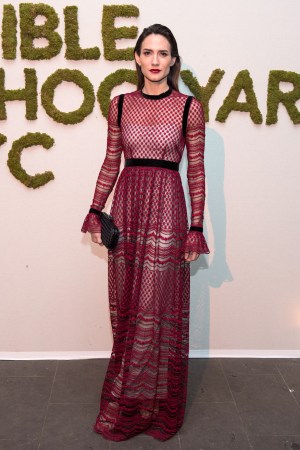 Chewy steak. Cold potatoes. Oftentimes, at fancy, large-scale dinner functions, so-so cuisine is predictable and par for the course. Not so at the fourth annual Edible Schoolyard NYC spring benefit at Skylight at Moynihan Station on Tuesday night. The nonprofit — which partners with public schools to educate and transform the eating habits of schoolchildren through garden and kitchen classes — brought together a roster of 28 chefs to prep four-course suppers for several hundred lucky guests. Among them: Waris Ahluwalia, Seth Meyers, Arden Wohl, Zani Gugelmann, Dan Auerbach, Athena Calderone and Lela Rose, who wore dangling cherry earrings, a nod to the culinary theme.

Chaired by David Chang, founder of the Momofuku restaurant group, each chef was designated one or two tables to cook for in the packed house. “It’s intimate, which I really like,” said chef April Bloomfield of The Spotted Pig and The Breslin bar and dining room. “It’s not cooking for a thousand people.” Bloomfield was joined by fellow Brit chef Ruth Rogers of The River Cafe; Michael Anthony of Gramercy Tavern; Jean-François Bruel of Daniel; Jessica Koslow of Sqirl; Eric Werner of Hartwood; Danny Bowien of Mission Chinese Food and Mission Cantina and several others.

Joseph “JJ” Johnson, the James Beard-nominated executive chef at Harlem restaurant The Cecil and Minton’s, was plating lobster ceviche for his guests. He said he’s due to give a talk soon at P.S./M.S. 7 in East Harlem, one of Edible Schoolyard NYC’s two Demonstration Schools in New York. “I do this thing with young kids called Skittles versus beets,” Johnson said. “I make them understand that natural sugar has the same amount [of sweetness] as artificial sugar. I make them eat the beet first, then the Skittles…and eight out of 10 kids always pick the beet.”

The venue’s decor, conceived by Bronson van Wyck, featured ferns and vegetables suspended from the ceiling. “The carrots fell on somebody’s head earlier,” noted Martha Stewart. She was seated at the table of Ignacio Mattos, who runs SoHo restaurants Estela and Café Altro Paradiso with restaurateur Thomas Carter. “We haven’t had dessert yet, but everything was delicious.…I’m sharing with the whole table. I’ve had all the chefs on my show; they’re all friends.”

Throughout dinner, an auction led by the very funny Jamie Niven of Sotheby’s catered to the foodies in the room with all sorts of packages, including the opportunity to host a private ice cream party for 25 people at Morgenstern’s Finest Ice Cream on the Lower East Side. One bidder in the room paid $72,000 to skip the line at a few of the busiest restaurants in the world — such as Franklin Barbecue in Austin, Tex., where guests regularly line up 12 hours in advance for a table.

All of the proceeds benefited the kids of Edible Schoolyard NYC. “Every day, I see my students learn that their opinion matters, even if it’s only about broccoli,” said Leonisa Johnson, a kitchen teacher at P.S./M.S. 7 & Global Tech Prep. “When [one student] exclaimed, ‘Can we add sunflower seeds to our salad? It adds texture,’ I knew things were changing.”