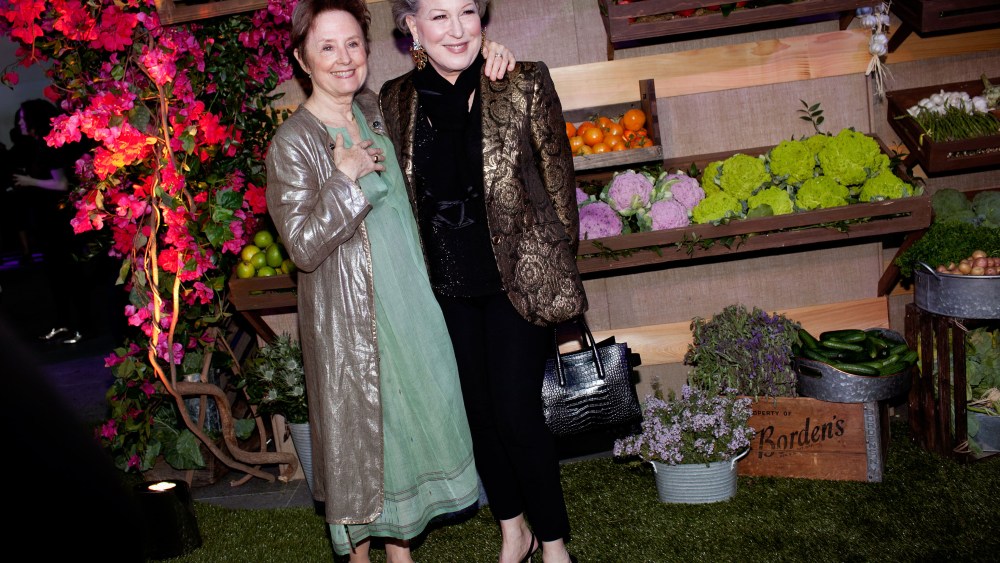 A flurry of cameras snapped as Alice Waters and culinary confidant Martha Stewart posed in front of an array of fresh produce inside the lobby at 180 Maiden Lane on Monday night. Waters had made her way to the financial district in celebration of the seventh annual Edible Schoolyard NYC Spring Benefit — and to be honored by the organization that she had founded in Berkeley, Calif. in 1995.

The nonprofit organization partners with New York public schools to offer gardening and cooking classes that empower children to make healthy choices for themselves, their communities and their planet.

“The thing that I really admire about [Waters] is that she’s completely uncompromising,” said Edible Schoolyard NYC’s executive director, Kate Brashares. “She has this incredible vision that she has really brought to life and really influenced so many other people.”

The sold-out event brought an assemblage of guests from all walks of life, including business tycoon Andrew Frankel, artist Damian Loeb and lifestyle blogger Athena Calderone. The decor, designed by Bronson Van Wyck, turned the lobby into a garden complete with wildflowers, ferns and faux grass carpeting. Meanwhile, Aerin Lauder and Lela Rose donned floral dresses in line with the event’s botanical core while Carolyn Murphy, drink in hand, enjoyed a brief chat with Waris Ahluwalia.

As cocktail hour dwindled to a close, honorary co-chair Jake Gyllenhaal was a no-show, but nonetheless, the show went on.

As in previous years, a group of more than 20 chefs from some of the city’s most coveted restaurants were tasked with preparing four-course menus for an individual table of guests. Among the chefs de cuisine were Greg Baxtrom of Olmsted, Corey Chow of Per Se and Ryan Hardy of Charlie Bird and Pasquale Jones. All were hand-picked by the event’s culinary chair, David Chang of Momofuku.

“[The spring benefit] is the centerpiece of what we strive for in cooking,” said Hardy, who recently opened Legacy Records, Easy Victor Café and Ada’s Place at Hudson Yards. “It’s not just to sell to customers that come into a restaurant, but to really change the vibe of food and culture and that starts with children, the next generation.”

Waters was introduced by friend and “fellow rabble-rouser” Bette Midler. The two met 30 years ago, when Midler dined at Waters’ Chez Panisse restaurant in Berkeley. “I realized immediately that [Waters] was a kindred spirit and a revolutionary operating under the cover of a brilliant chef and restaurateur,” Midler noted.

Waters, noticeably emotional, spoke of the broken public school system, which Edible Schoolyard attempts to transform. “What’s happened is that we’ve institutionalized our schools like we have our farms,” said Waters. “It’s why we have to focus all of our intention on our last democratic institution, the public school system. It’s the one place in this country where we can reach every single child when they’re young and when they’re open.”

An auction hosted by the jocular Jamie Niven of Sotheby’s followed dessert. Chefs cheered on bidders, who fought over coveted prizes including a fried chicken and caviar dinner at Chang’s Momofuku. A “skip the line” pass at 13 of the world’s most sought-after restaurants, counting River Café in London and Noma in Copenhagen, sold for a rather reasonable $8,000. All of the proceeds from the auction were donated to Edible Schoolyard NYC.