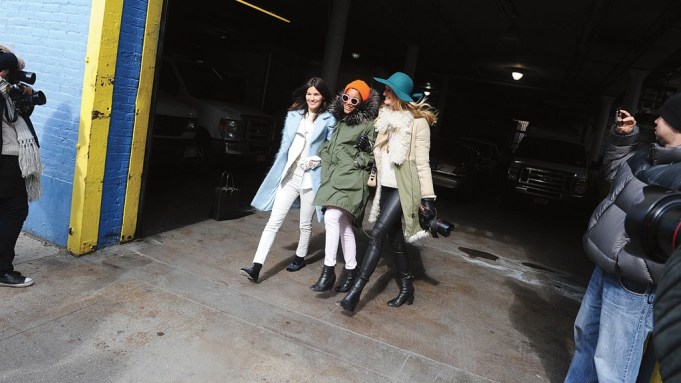 7:41 p.m., amfAR Benefit: Lindsay Lohan—platinum blonde in white dress—attracts all the paparazzi attention… We swarm… She puts her hand in my lens, I follow her but someone gives me a “flat tire” and I lose my shoe in the middle of the ballroom of Cipriani Wall Street…As I’m putting it back on, I see a flurry of flashes… I look over and see Lindsay posing with Woody Allen… great shot… missed it.

7:49 p.m.: Enjoying the powers of wielding a camera, I pose Cindy Crawford and Liz Hurley. Two of the most beautiful women in the world stop talking mid-sentence, smile, devote their attention to me… Even if it’s just for a fleeting moment, I feel loved…

7:55 p.m.: Kate Winslet is touring the “CFDA at 50” presentation at FIT and about 10 photogs are following her. We’re all waiting for one of us to get up the courage to ask her to pose with the dresses behind her. Finally I am elected/volunteered. I take a deep breath and as politely as possible ask her if she would stand for a photo… She responds in her proper English accent, “Do you mind if I don’t?” So we proceed to track her around snapping candids.

11:46 p.m. Yigal Party: Talking to Annelise Peterson about the old days at original Double Seven after-hours club…When we’d go there late-nite after covering events… She tells a story about how she interviewed with the president of Gucci and how she went all prim and proper… halfway through he says, “Well, we have met before”…she says “Where? When?” He says, “A few nights ago at Double Seven—you were dancing on the pole on top of the banquette”… She got the job.

12:28 p.m., Prabal Gurung: Elettra Wiedemann at Prabul show wearing his paint-splashed pants—the hit of the show. Prabal is the Jackson Pollock of fashion.

5:47 p.m.: My editor Matt Lynch grabs me to go backstage at Alex Wang: We want pics and quotes from Gisele a few days after she made some crazy comments about her hubby’s Super Bowl loss…I shoot her posing with the other supes: Karolina Kurkova, Carmen Kass and Shalom Harlow. Matt gets his interview—I flick her alone—then he asks about the Super Bowl talk. She gives him the hand and just walks away…

2:27 p.m.: Julian Lennon says he has a photo exhibition coming up in London…everyone’s a photographer.

12:33 a.m.: Courtney Love, a hot mess, makes her grand entree then goes to the packed VIP area… I’m trying to follow for a pic… she drops her coat on the floor in front of me… I help her pick it up. I snap her from far away—don’t want her to freak out on me.

10:20 a.m., Carolina Herrera: I see Derek Blasberg sitting second row… Kiddingly, I say “I’m doing an assignment on second row because second-row people are cooler than front-row people.” Glenda Baily is sitting in front of Derek and overhears. Says, “That’s great.” … I say, “Don’t steal my idea.” We all have a laugh.

12:12 p.m.: To Sky Ferreira: “Hi, great party last nite.” She says, “Party last nite?” Confused, then I remember it was Cory Kennedy I saw. I go back and tell Sky it must have been a really good party… for me :)

2:09 p.m.: An email comes in from my office at WWD: “Need shots of Deborah Needleman and Sally Singer for a piece we are working on”… I’m on a mission.

2:11 p.m.: Hal Rubenstein throws a hissy fit bc the paparazzi crowded his space in a feeding frenzy for Ashley Greene and Emmy Rossum. One of the crazed shooters gets too close, Hal pushes him and screams, “I don’t give a shit—this is bullshit!” Gets up and complains to Donna publicist.

2:16 p.m.: Deborah Needleman sitting a few seats from Hal Rubenstein… I have to get her… gingerly I sneak past Hal and snap her… trying not to make eye contact with him or security. Then I get Sally Singer.

3:05 p.m.: Walking to Philip Lim Show with Brit photog Steve Woods, passing through the gas station near Milk Studios. He just whips out his willy and takes a whiz on the pump…now I know why he no longer works for the royal family.

6:08 p.m.: Getting pr briefing on what celebs are expected at Betsey Johnson. She says Eminem so we get excited… then she says, “Oh no, sorry, not the rapper, just a giant costumed M&M candy. They’re sponsors.”

7:40 p.m., Marc Jacobs: Gorgeous set, a work of art, breathtaking… Rachel Feinstein did the design… I overhear her husband John Currin say, “This is what Rachel can do with a million dollars.”

8:21 p.m.: Maria Sharapova publicist sets photo op for me. Dakota Fanning looks adorable, snap her and sit for ambiance in an open seat… get kicked out of seat. WWD’s Bridget Foley rescues me, saved a seat for me. Push my way backstage after show. Madonna rumor never materializes. Get Marc and Dakota—great shot.

11:01 a.m., Vera Wang: Discussing my love life with Marjorie Gubelmann and Mickey Boardman. I say I prefer dating to marriage. Marjorie quotes Rena Sindi: “There’s happily and there’s married and rarely do the two ever meet.” Something like that.

2:28 p.m.: Matt Damon arrives, quite orderly. Photogs form semicircle around him. He says, “I’ve never been this close to you guys,” meaning the paparazzi that stalk him to death. This is his first fashion show.

10:34 p.m., Miu Miu Party: Kate Mara and Mia Wasikowska doing a photo op and having fun posing, suddenly a random pr person jumps in and breaks it up. These girls are enjoying posing—why do these pr people feel they have to control everything? I rarely get candid party shots anymore bc of this.

2:24 p.m.: Heard Olsen Twins are coming. I tell Lisa Marsh how a few seasons ago I went to shoot their collection The Row… I felt two hands on my left shoulder then two hands on my right. It was Mary-Kate and Ashley, one on each side, leaning on me and looking at the display on my camera to make sure they liked the images I was making… A highlight of my career!

9:44 p.m.: Nicki Minaj poses with Lauder’s John Demsey, he produces a promotional lipstick from his pocket and she slathers it on… Very hot shot.

9:50 p.m.: Emma Snowdon-Jones wears a low—VERY low—cut dress. I ask her to lean forward. She’s pouring out… I egg her on more and more, the photogs are cracking up… she realizes and asks me “Do you just want me to take my top off??” and fakes taking it off… thought she would have.

1:52 p.m., Calvin Klein: WWD edit team hyped up for Rooney Mara. Pressure is on—I’m the only photog from our team allowed backstage—hope my camera works. I get her with Emma Stone!

9:09 p.m., Guns N’ Roses Fashion Week Finale Party: Total Spinal Tap moment. Trying to get in with Anushka at the Maritime hotel and Hiro. Back hallways and tunnels, in elevator that opens to brick wall… Hello Cleveland!!! Rock ’n’ Roll!!!

12:05 a.m.: Finally GnR comes on—they’re rocking! I’m jammed up front, two inches away from the guitar player… Axl sings in my face, great photo!!! Then this crazy girl decides to try to seduce Axl… she takes her bra off, balls it up and throws it at him, he doesn’t even notice… she turns her attention to me and we dance the nite away!!!