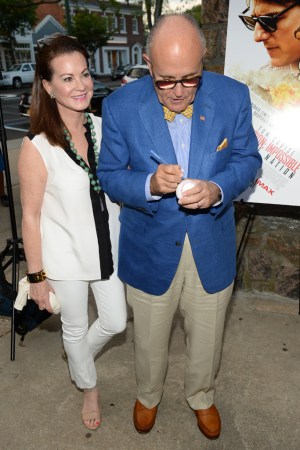 WWD’s veteran party photographer Steve Eichner has made it out to Long Island’s East End a time or two before, often squeezing in a quick surf between covering the latest Hamptons bashes. Here, he shares his perspective from his latest trek.

7:34 p.m. “Throw in the first pitch for this film,” Rudy Giuliani cracks, signing a baseball for a fan.

12:00 p.m. The crowd can best be described as frothing for a bargain. I hold my camera over my head and snap the line of VIP shoppers. At the strike of noon, the doors open and the stampede races to the vendors. Let the games begin!

12:43 p.m. Like mother, like son. Molly Sims poses with her son Brooks and I think he loves the camera more than her, if that’s possible.

6:05 p.m.  Oh, hello! I’m greeted at the entrance by some sort of pink SpongeBob-Squarepants-meets-Gumby creature.

6:15 p.m.  This is f–king awesome! An insane death-metal band is playing violently loud inside a tiny house. This is my favorite event.

6:37 p.m.  These are some lazy artists. I notice at least three performance art pieces where the people appear to be either passed out, drugged out or sleeping.

7:01 p.m.  “What are we farming tonight, Jamee?” I ask Jamee Gregory, dressed in overalls and a bandana.

8:23 p.m.  I get my shot. Sierra from CocoRosie and Nadya from Pussy Riot: two real pieces…of work.