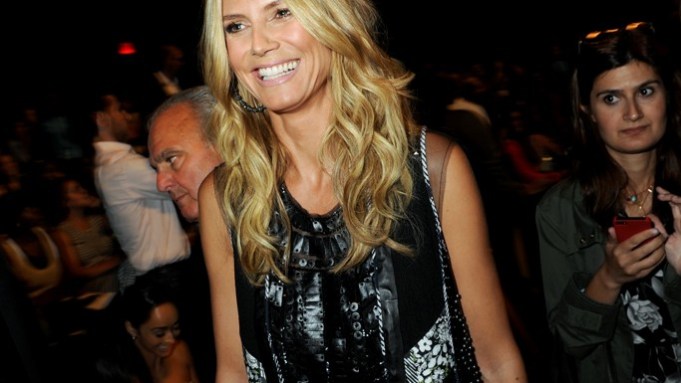 From 9 a.m. presentations to 3 a.m. shenanigans at the hottest spots of the season, Steve Eichner, WWD nightlife photographer extraordinaire, sees it all through his viewfinder during fashion week. Follow along this season with his daily diary, Eichner’s Eye.

BCBG Max Azria Show
10:02 a.m. My first “official” show of fashion week, even though I had been shooting pre-fashion week events since Tuesday. I walk in and a security guard asks me, “what are you doing?!” I said, “This sticker allows me full access to walk around front row, to shoot all the celebrities.” Then he said, “Oh, at least you tell me what you’re doing. I ask all the other photogs and they just say, ‘taking pictures.’”

10:38 a.m. In the midst of B-list celebrity mayhem the cry, “Clear the runway!” is heard. We know we’re expecting Heidi Klum and there’s a seat for her, I say to the security guy, “it’s not time for auf wiedersehen. Heidi is not here yet!” I do the dance, trying to be invisible, shuffling around the catwalk, finally she appears. I said, “Heidi! Big smile this way!” Click, click, click. As I pass the security guard, I say, “Now, it’s time for auf Wiedersehen.”

Midday street style shoot
11:22 a.m. Hanuk Hanuk runs over to me in his usual fit of glee, and plants one of his trademark kisses on my cheek. I notice he’s shooting street fashion, he says, “I hate it, but it pays half my AmEx bill!” A girl’s gotta do, what a girl’s gotta do.

11:28 a.m. I spy the ultimate selfie invention. A guy has his cell perched at the end of a telescopic rod, for the ultimate in self-portraiture. Dude, I gotta market that thing!

Portrait shoot of Francisco Costa
3:43 p.m. Under a neon sign with Francisco’s motto reading, “Collaboration, Innovation, Fearlessness,” as I pose the Calvin Klein designer, I notice something red on his shirt. Upon closer inspection, it’s a dry cleaning tag. I point it out and ask him to remove it, and he just laughs. His publicist chimes in: “That’s his trademark. This always happens on red carpets, he’s always being asked to remove it.”

The Top of The Standard Fifth Anniversary
10:33 p.m. The room is styled like a Twenties-era New Year’s Eve celebration. Golden star balloons cover the ceiling and a jazz band — perfectly coinciding with the Jewish New Year.

10:36 p.m. Models Jessica White and Julie Henderson saunter in. I pull some golden balloons from the ceiling. They ham it up. Great shot!

10:45 p.m. I see the man of the hour, Andre Balazs, and I shake his hand. I capture a photo of him in the middle of all the excitement. When I review what my lens actually created, it appears as though the light fixtures and decorative ceiling are growing from his head like a crown.