WWD photographer Steve Eichner sees it all and shares his unique perspective from the front lines of the Coachella Valley Music and Arts Annual Festival in Indio, Calif. 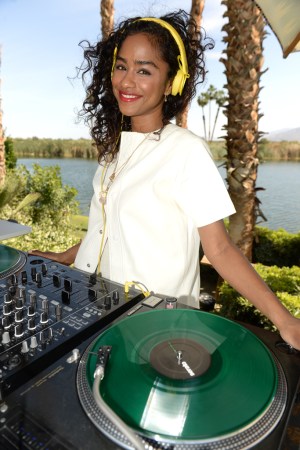 WWD photographer Steve Eichner sees it all and shares his unique perspective from the front lines of the Coachella Valley Music and Arts Annual Festival in Indio, Calif.

2:48 p.m.: I arrive early and watch the production team scurry around like busy ants preparing. It’s a gorgeous house. The infinity pool is full of pink and blue floaties.

3:19 p.m.: DJ Vashtie starts spinning. I roll over to snap her. “They imported you from New York?” she says.

3:24 p.m.: “How about over there on the swan?” I direct Lizzy Plapinger. She’s a good sport and obliges. She sits in the swan-shaped paddle boat and floats out to the middle of the pond. The light is just right to make the ideal photograph.

3:30 p.m.: I pick up a pork carnita from a passed-around tray. Then I’m offered a beef slider. I can’t. I need at least one hand free to shoot!

4:10 p.m.: “Too close,” Rosie Huntington-Whiteley says to me as she blocks her face with her hand. Her p.r. chimes in, “We’re only doing interviews now.” Alrighty then.

4:12 p.m.: “How about this?” Mary Charteris of the Big Pink says as she flashes me her tiny bikini top. Ooh la la.

4:29 p.m.: “Kate Bosworth is here,” a publicist tells me. I go on search mode. I see her with Stuart Vevers, the Coach designer. I take a few natural candids of her, then ask, “Stuart, can I get a few with you and Kate?” They pose for me. “Everyone is so awkward about asking,” a bystander says. “Kate, just be natural,” I say. “No, no natural for me,” she replies. OK, now it’s getting awkward.

4:56 p.m.: I spot musician Madilyn Bailey. “Can you wait a minute?” a handler asks. “We gotta go get her a (Coach) bag.” “OK,” I smile. Now that she’s sufficiently propped with her swag, she poses.

5:07 p.m.: I upload to the WWD Instagram a picture of Kate smiling for me and a pond and fountain are in the background. Seconds later I see a comment posted: “Maybe California needs that water for agriculture more than a fake pond in the middle of the desert right now.” Everyone’s a critic.

5:11 p.m.: If I see another pair of heart-shaped sunglasses I think I’m gonna barf.

5:29 p.m.: “Really? They’re playing Stevie Nicks,” I overhear someone say in Tara Reid’s scraggly crew as they exit the party.

7:12 p.m.: Haim sisters posing boringly for Getty. “Whoop it up,” I scream. Finally, they start dancing and I get something more fun.

10:43 a.m.: Collecting wristbands is like collecting badges of honor at Coachella.

11:17 a.m.: “So what goes on here at Shopstyle villa?” I inquire. “What do you mean?” two ladies surrounded by flowers say. “Do people shop here?” “We are actually making fresh flower crowns for the guests as they arrive.” Aw.

11:30 a.m.: “So tell me the story about your Coachella necklace,” I ask a random partygoer. “My Coachella necklace is made by Westland Jewelry. She’s an L.A. designer.” “Is it a one of a kind?” “No, I think there are three of these. She’s making them for anyone who wants it.” “For free?” “No.” Laughter. “Not for free.”

11:39 a.m.: “It’s sooo hot and sweaty,” Zoe Kravitz says, fanning herself with her hands as she does her mandatory photo op. Someone makes a joke and she throws her head back and cracks up, revealing her gold tooth. I never noticed that. In fact, I’ve never seen her even crack a smile.

11:42 a.m.: Speaking of hot. Hannah Bronfman waves hello to me wearing a teeny weeny blue bikini top. Her abs are ripped. Girl been hittin’ the gym.

12:48 p.m.: What’s a pool party without some synchronized swimmers? And it makes for amazing photographs as well.

1:55 p.m.: Baby with headphones. Adorable! At lease these parents have some brains.

2:03 p.m.: I’m kind of obsessed with Bella Thorne. She’s, like, so free and uninhibited. She’s dancing as if no one is looking.

2:28 p.m.: Now THIS is Coachella. I grab a pic of a guy with a beer and a vaporizer in his mouth at the same time.

3:44 p.m.: “Hiiii,” Rachel Zoe welcomes me to her party. “I’m not officially at Coachella. People keep asking me but I’m not going to the festival. I need to be home with the babies.” Now, that actually makes a lot of sense. I respect that!

421 p.m.: I make a phone call to Katie Jones, my colleague photographing the They Are Wearings at the festival for WWD. “Hey, Katie, I have a few hours before my next event, I’d like to come to the festival and catch some music.” “Sure, come now I’ll lend you my wristband” she says. Awesome.

5:41 p.m.: “Hi Steve!!!” Katie greets me. “So I have this general admission wristband for you. I took it off, but it’s really small now, try and slip it on,” Of course, it does not fit me. “What???” I inquire. “They make it so you can’t open it up once it’s on your wrist. You’re not supposed to transfer it from person to person. If the yellow clasp is broken, the wristband is void and there’s a chip in the wristband that has to be scanned upon entry,” she tells me. I had no idea. I thought she would just give me the wristband and I’d be on my way in. There is a little yellow plastic part that cinches the wristband closed. It only tightens once it’s on. We spend 15 minutes trying that to no avail.

6:24 p.m.: Dejected, I go back to my car, put the key in and start it up, then I think to myself: “I have been to over 50 Grateful Dead shows, most of which I arrived at without tickets, and I managed to get into almost all of them.” I go into MacGyver mode. I break part of the yellow clasp open, but now it’s damaged. I decide to go back to the girls and show them what it looks like inside as it may help them. Just then, they get theirs loose using the another method. “Let’s just stick yours together and we will all go in together,” they tell me. I put the wristband on. They use some eyelash glue to reattach my clasp. I hide the broken plastic part under some other wristbands. Heart pounding as we make our way to the gate. It’s a long walk, and I’m visualizing getting in, but fear getting caught.

7:33 p.m.: I ask someone to take a photo of me in front of the giant ferris wheel and post it.

7:35 p.m.: Snap a pic of the girl with the Christmas light fur coat à la Katy Perry at the Met gala.

11:33 p.m.: Teddy bear chair, oversize coke cans, everyone dressed to the nines. It must be a Moschino party.

1:29 a.m.: A girl comes in with giant teddy bear and heart-shaped pasties. Only at Jeremy Scott’s…

1:55 a.m.: FKA Twigs pulls her lace top over her face as I try to get a snap of her and Robert Pattinson. Good thing my flash is so powerful I can see her face anyway, ha!

2:07 a.m.: I see a pair of humongous hoop earrings. Must be Katy Perry! She grabs Mia Moretti and starts dancing. She’s wearing a little gold top and her jacket is hanging off of her shoulders, making her way through the crowd chewing gum and blowing bubbles to the thumping beats of Skrillex and Diplo. Pattinson embraces her. She spots Jeremy and gives him a big wet kiss. Pretty good for my first Coachella.