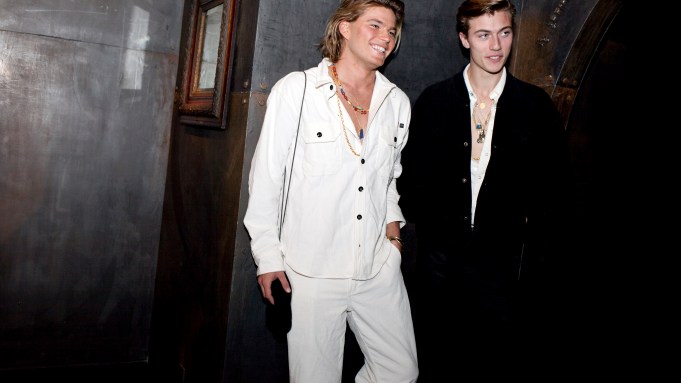 Thursday night marked the relocation party for jewelry Eli Halili, though he hadn’t gone far; his previous location, where he was open for roughly 12 years, was just four stores down on Mott Street in SoHo.

“I wanted to get something bigger, to have a garden in the back,” Halili said over cocktails in his new boutique. His close friend Michael Carl of Vanity Fair had gathered a pool of editors, along with Halili’s campaign boys Jordan Barrett and Lucky Blue Smith — and Victor Cruz, for good measure — for dinner in the new space.

“I love gardens — I wanted to give a different environment, like my home [on the Lower East Side],” Halili said. “So you come in and there is a kitchen, a living room, my studio, and then you go out to the garden.”

His own garden is ripe with hydrangeas, his favorite, and dahlias. “When I was little I grew roses — that was my family’s business. That’s how I got to love gardening, but hydrangeas are my favorite.”

Smith and Barrett were adorned with necklaces by Halili upon entrance, before making a beeline to the back garden.

“Lucky is very much like family — when he grew up I was very much next to him and advised him on anything he was doing. We became really close so he’s really part of my brand,” Halili explained. “And Jordan and I became really close because he lives in town and loves the jewelry; he likes earthy stuff, he’s really much my vibe. And I like to work with people who are really cool and down to earth. I mean, I have celebrities and things but this is not my niche. It’s more the operation of what I do.”

The dream celebrity to dress? “Natalie Portman. I love her and I also love what’s her name, she’s my favorite actress…she has a lisp problem…Drew Barrymore. I love, love, love,” Halili said.

As for the garden’s future now that it’s winter, the designer noted that while it’ll be used for client breakfasts and dinners in warmer months, it’s largely for his red poodle, Wyatt.

“I care for animals and he’s with me at work so much. I wanted him to be able to go in and out to a garden,” Halili said. “I did a whole runway around these windows with little rocks so he can go out around the building.”