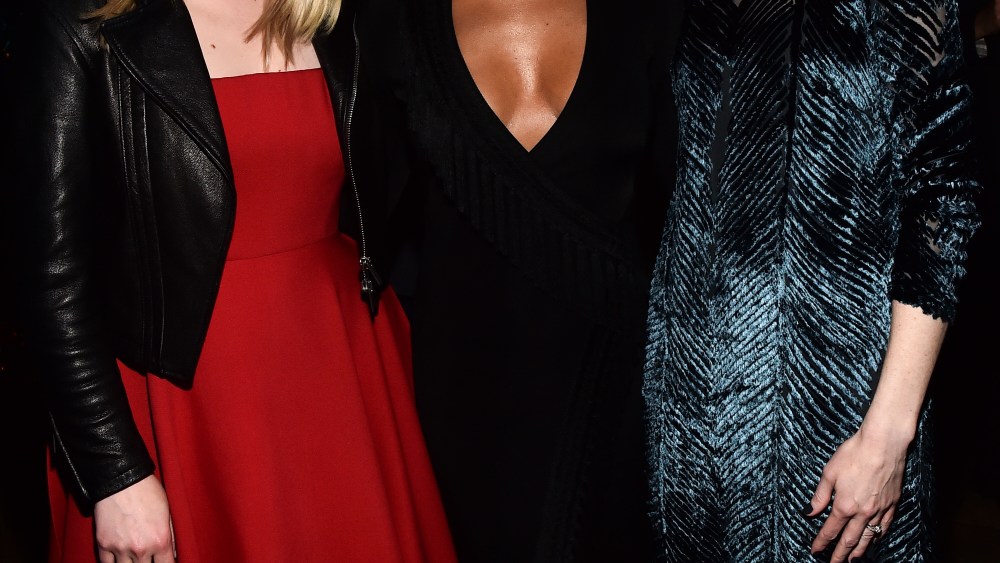 “I’ve always wanted to wear red Dior,” Elisabeth Moss said of the strapless frock she donned for the season two premiere of “The Handmaid’s Tale” on Thursday night at the TCL Chinese Theatre in Hollywood. “It was a choice,” Moss said, acknowledging that the look, selected with stylist Karla Welch, was indeed an homage to the show’s red Ane Crabtree designed costumes.

Bledel was among those eager to provide hints about the second season, which picks up where Margaret Atwood’s novel left off. “Our writers have crafted this incredible new story,” she said. “It takes things even further, which I didn’t know was possible. It’s absolutely brutal. It’s a harrowing tale to see it all unfold. I was surprised by three major plot points that my character was a part of. That’s a sign of amazing writing.”

According to television critics who have previewed the first handful of episodes — the show returns to Hulu for 13 episodes on April 25 — the show’s second season is even more provocative and graphic than the first. “There’s a very dark scene later on in this season,” Moss shared. “It was cut down a little bit because it didn’t need to be gratuitous. It needed to tell the story, to tell what the character was feeling, and once that happens, we’re good. We’re not trying to pound anything down anyone’s throats.”

Brewer promised the season isn’t all doom and gloom. “There are some themes of motherhood that are uplifting,” she said. “At times, it’s heartbreaking, but at other times, it’s touching.” Mid-interview, Brewer paused a city bus featuring a billboard for the show happened to drive by. Brewer said it never gets old. “Every time I’m in an Uber, if we pass a billboard, I’m like, ‘That’s my show, by the way.'”

Despite the Hulu drama’s critical success, Moss said they didn’t feel any pressure while shooting the second time around. “It was really fun, honestly,” she said. “We made the [first] season in a vacuum hoping that people would like it. We hoped that they’d let us do it again. And then to have this global attention and the fans being so excited about it? It makes you excited.”

When a reporter admitted they’d already watched six episodes in one sitting, Moss laughed, “I can’t even do that. That’s insane.” Her recommendation for binging? One episode. “One per a glass of wine,” she joked.

Meanwhile, newcomer Sydney Sweeney, who joins the cast for nine episodes this season, admitted she was a tad nervous going into the night. “I tried not to throw up on the way here,” she laughed. She certainly looked like a fashion pro in a Carolina Herrera dress as she discussed her new character. “Her name is Eden,” she said. “She’s 15. She grew up in Gilead,” she said.

Earlier in the evening, a row of women clad in the show’s red costumes appeared on the carpet and for nearly an hour, stood in silence with stoic expressions as cast members conducted interviews. The display seemed particularly fitting for a dystopian show about the oppression of women.

Brugel divulged that the cast cope with the drama’s gritty subject matter by letting loose between takes. “The vibe on set is the complete opposite,” she said. “We talk about ‘The Bachelor’ and we giggle.”

Meanwhile, Wiley said the show has contributed to her own personal evolution. “The biggest change that’s happened for me from playing this character is how I think about my own voice,” she said, “and the platform that I have and how I would like to use it for activism and speaking out about things that matter to me.”

For his part, Minghella promised, “Anyone who sees season two who was a fan of season one will say this is our strongest season. It’s bigger. It’s better. And it’s more emotional.” The actor continued, “I’m a small cog in this machine, so when I watch the show, I get to watch the 95 percent of the show that I’m not privy to, as an audience member. It’s fun to watch it.”