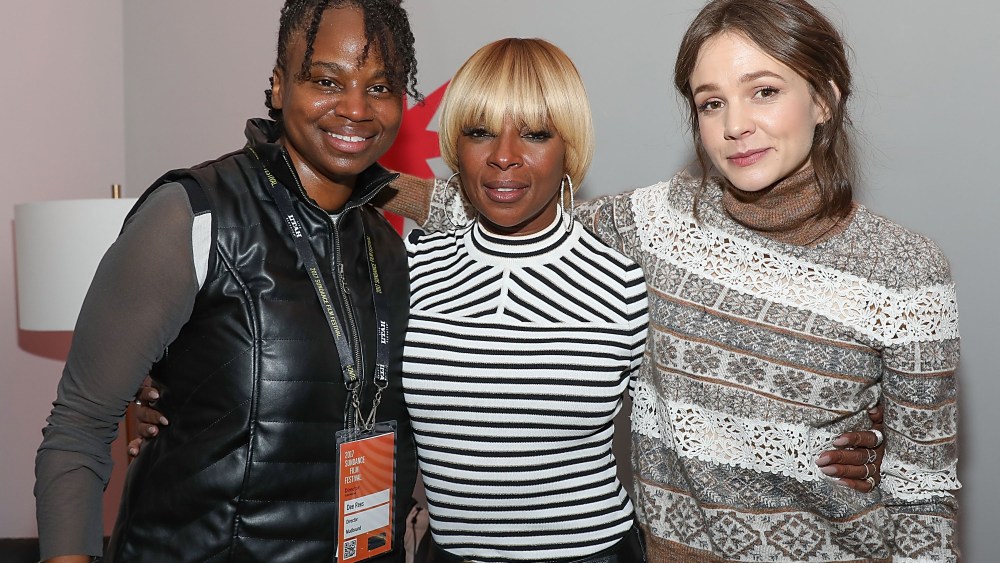 The party scene at Sundance so far has paled in comparison with the star-studded Women’s March on Main Street, which on Saturday drew Charlize Theron, Kristen Stewart, and John Legend, but that didn’t stop actors and filmmakers from celebrating their indie projects in Old Town Park City, UT, that night.

After receiving a standing ovation at its premiere, the Forties-set drama “Mudbound” was feted at the Stella Artois Filmmaker Lounge, where director Dee Rees was joined by castmates Mary J. Blige, Carey Mulligan, and Garrett Hedlund. Based on Hillary Jordan’s novel about two farming families in the segregated South, the powerful tale was quickly heralded as a contender at next year’s Academy Awards.

Blige had two reasons to party; the night before, she celebrated her birthday at the mountainside home of Park City power couple Kevin and Kathryn Burns with friends including actor Jason Mitchell and Apple exec Bozoma Saint John. After blowing out the candles on her crown-topped cake (courtesty of The Hudson LA restaurant), which read, “Happy birthday, Queen,” Blige danced to her own song.

A few blocks away on Saturday, the cast of another prestige picture, “Wind River,” which stars Elizabeth Olsen and Jeremy Renner, celebrated at the Acura Studio. The night before Sundance darling Olsen premiered her other film, “Ingrid Goes West,” co-starring Aubrey Plaza.

Meanwhile, Elijah Wood and Brittany Snow stopped by the XYZ Film cocktail party at the Kia Supper Suite (clearly, auto and telecom giants have more marketing dollars to spend at the fest). Wood, who starred in the opening night drama “I Don’t Feel at Home in This World Anymore,” immediately hit the bar to unwind after a long day of press junkets.

Snow eagerly talked up her new film, “Bushwick” while hanging out with her longtime friend and former costar Paul Wesley. “We’ve been best friends since we were teenagers. He played my boyfriend on ‘Guiding Light,’” she said. “He was going snowboarding here and I was like, ‘You have to come see my movie.’”

“Bushwick” is an action-thriller is about a 20-year-old woman and a war veteran who team up when a Texas military force invades their Brooklyn neighborhoods. “We did 20-minute long ‘Birdman’-esque like scenes,” she explained. “There was no way you could mess up or else you were totally screwing the entire crew over.”

As for the Sundance experience, Snow said, “This is the second time that I’ve been here with a movie. It’s the films I’ve put my blood, sweat, and tears into and there’s not all of the glitz and glamour. It’s always fun to see people recognize that in such a close-knit environment.”

“I’m so nervous. I haven’t seen my movie yet,” said transgender digital star Gigi Gorgeous, the subject of a documentary directed by Oscar-winning filmmaker Barbara Kopple.

She continued, “I couldn’t imagine anywhere else in the world that I would rather it premiere. This is so iconic.” Gorgeous said she’d been hitting panels to promote her message: “We’ve been talking about using our voices on our social platforms for change and acceptance and positivity.”

Meanwhile, Wool said she’d started her day at the Women’s March on Main. “I found myself alone in a group of Park City locals,” she said. “It was an interesting dynamic between the festival and the people who live here.” Wool has multiple projects at the festival. “I’m here with ‘XX’ and ‘Strangers,’ and I also have a film at Slamdance called ‘Automatic at Sea,” she said, then paused. “I’m a little busy.”