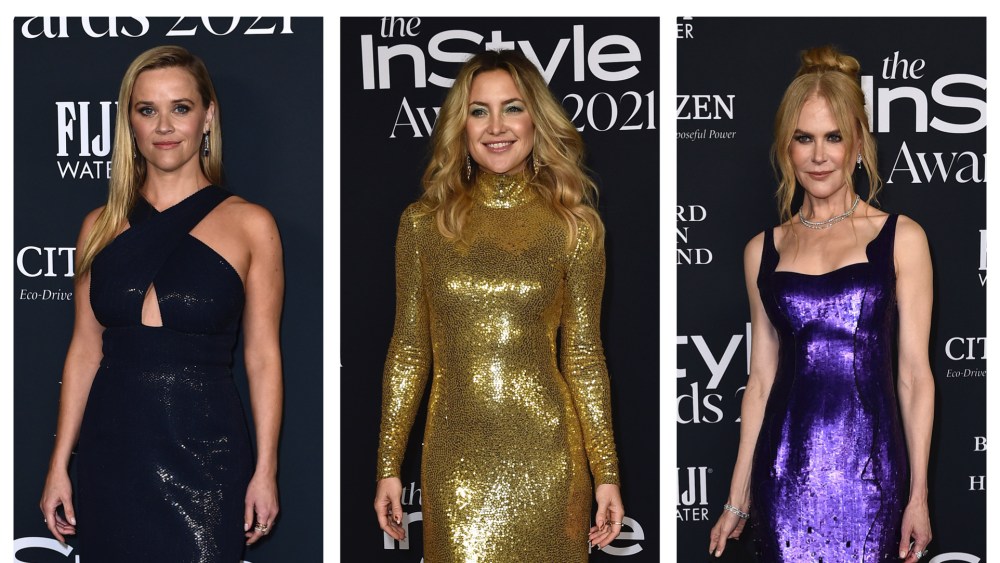 The InStyle Awards — now in its sixth year — brought together industry heavy hitters on Monday night at The Getty Center in Los Angeles.

The annual dinner party, held in an outdoor courtyard of the museum — amid a thick cloud of fog this year — honors both talent and those behind the scenes, including the image makers, makeup artists, hair and fashion stylists who bring looks to life.

“What a moment to be at a beautiful museum with some of our dearest friends, celebrating our art and our culture and how much we all love each other,” Witherspoon went on. “First of all, I haven’t been out of the house in two years, so get ready. I’m going to unleash on you guys.”

The actress and producer was on stage to introduce her longtime hairstylist, Lona Vigi, who was recognized for her work.

“Here’s a fun fact, not one but two men have tattooed her name on their body,” teased Witherspoon. “Just let that sink in…most girls struggle to even get a guy to put their number in their phone…and that is because she gets full commitment.”

Witherspoon and Vigi have collaborated on seven films and three television shows since meeting on a movie set in Philadelphia 12 years ago, she revealed.

For her part, Fanning — honoring fashion stylist Samantha McMillen — shared the two met a decade ago when she was a young teen.

“She is the reigning queen of tailoring suits, whether it’s her dressed in her own tuxedo, trailing her starlets with train in hand or Thor on her arm — and I wanted to address this, Sam, because I think most of your clients have been voted sexiest man alive at one point or another and Dakota, my sister, and I are still single, so, just like a food for thought there,” Fanning mused, giggling.

When Fanning first approached the mic, the thin chain holding together her metallic crop top by Balmain broke — though the jeweled item kept in place.

“It just busted completely,” she exclaimed. “I have a little style emergency, but hey it’s staying. It’s fine.”

The actress got teary-eyed by the end of her speech, telling McMillen: “Without you none of us would have those in-style moments. I’m going to cry. I love you, Samantha, with all of my heart. You are my family.”

“Thank you for getting me out of a leotard for the night,” said the star Olympic gymnast as she was given “The Original” award for her trailblazing ways.

“When I was starting out, there were people who talked about the way I wore my hair or how big my legs were, but I learned to block out the noise,” she said. “Because after all, how can I tumble and have multiple moves named after me without the power in my legs?”

Familiar faces took the podium in rotation, one after another. Next was Kidman.

She came out to present Melissa McCarthy, her “Nine Perfect Strangers” costar, with the “Icon” award.

“First of all, I want to thank Margot Robbie,” teased McCarthy of Kidman. The comedian and actress brought the loudest laughs of the night. “I’m just kidding. I know exactly who that lady is. You know, I was thinking as I watched Nicole float out here, seemingly in a thundercloud of grace and power and poise, I thought to myself, ‘This is one of those teaching moments’…It got real quiet. We all felt it. Because I wanted to receive the lesson, and it was profound. It said very loudly in my head, ‘McCarthy, you jackass, you never want to follow Kidman.’”

Later, Storm Reid was the one showing praise, to her stylist, Jason Bolden (who also dresses Gorman).

Bolden, receiving the “Voice of Style” trophy, emphasized the importance of allies in the industry, thanking the publication for “bestowing this honor to a Black, queer boy from St. Louis.”

Zoë Kravitz (who will next be seen as Catwoman in Matt Reeves’ anticipated “The Batman”) honored her makeup artist, Nina Park, while “Hacks” actress Hannah Einbinder introduced Congresswoman Katie Porter (the “Badass Woman” recipient), and Christian Louboutin came out to honor Anifa Mvuemba with the “Future of Fashion” award.

“She’s a real powerhouse,” Louboutin said. “Anifa is a tour de force, an example of what it means to be a young, talented creative forging your own path in this new, rapidly changing world we live in.”

Mvuemba recounted her move from Congo to the U.S. over 20 years ago, saying: “As a designer and more importantly a Black woman, I find myself always wanting to push the envelope…To me, fashion is much deeper than just clothing. It’s about making people feel empowered and capable.”

The night ended with Hudson giving Kors the designer award.

“Michael Kors has been living fashion and making it since the age of five,” said Hudson, donning a gold sequin number by the designer. “His first business venture began when he was a teenager designing and selling clothes from his parents’ basement. That small basement boutique blossomed into a global fashion empire. To me, Michael Kors embodies the epitome of modern American style.”

She’s known Kors her entire life, she said, thanks to her mother, Goldie Hawn. Kors and Hawn met at Lothar’s clothing boutique (“a `70s staple”), where the designer first worked as a salesperson and window dresser, Hudson added.

“Personally, I’ve been lucky to know Michael before I was born,” she said. “His signature sensibility is rooted in his talent for sleek, precise tailoring that blends beauty and luxury with popularity in a way that few others really can.”

Sharing his background and thanking the women in his life and his husband, Lance LePere, Kors said he continues to feel a thrill putting on a runway show, even after decades working in fashion.

“It’s always this kind of adrenaline rush when we put on a great show,” he said. “But I have to tell you, the most exciting thing for me, still after 40 years, is seeing my designs come to life on real women in life, whether it’s someone in the public eye or someone on the subway, whether it’s someone who’s slaying a red carpet or someone who’s feeling more empowered at work or feeling just more confident and stylish in her day-to-day life.”