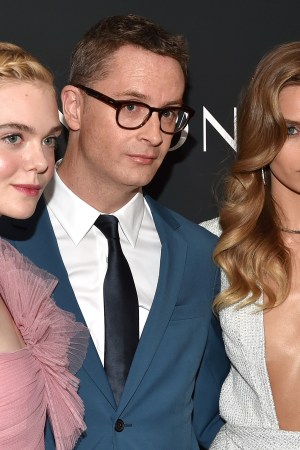 “Well…” Nicolas Winding Refn trailed off on Wednesday night. “The reaction at Cannes was not great.”

The Danish director, spiffy in a muted blue Prada suit, was working the press line of the Metrograph in Chinatown at the final stop of his “The Neon Demon” press tour. The film made its debut at Cannes and soon had the whole festival talking, something that seemed to delight Refn. “It was the best,” he smiled. “Diversity is the essence of creativity, especially when I’m the eye of the storm.”

The film is set in a pseudo dystopian reality in which hyperbolic narcissism reigns. It centers specifically on the fashion industry, portrayed as a place where psychotic models are victim to predatory designers and photographers. Cannibalism, graphic violence and lesbian necrophilia are some of the touchstones. Needless to say, it caused quite a stir. “I make films based on what I would like to see. Like fetishization of my fantasy,” Refn said.

Soon Elle Fanning arrived in a pale pink tulle Gucci, a crown braid and minimal makeup, looking every bit the virginal ingénue she plays. “Elle’s sweet as pie,” costar Abbey Lee Kershaw smiled. “She’s like a diamond; you put Elle on any set, and I’m sure she’s going to brighten the room.”

The beaming Fanning took a break from posing for photographers to speak about the film as late-arriving moviegoers scampered into the theater, popcorn and Pocky sticks in hand.

“When I met Nick for the first time, he asked me, ‘do you think you’re beautiful?’ Like, what? You don’t want to answer that, but then there’s another thing, like, why don’t I want to answer that? You should love yourself and we’re trying to teach people to embrace themselves and think that they’re beautiful. There’s nothing wrong with that,” she said, then pausing. “But then there’s a fine line to having a huge ego.”