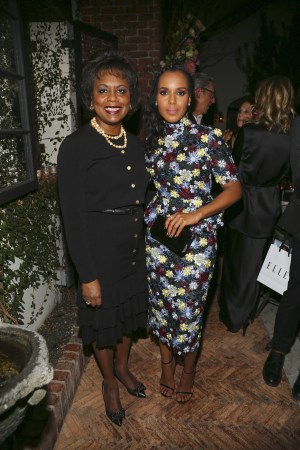 Kerry Washington continued to celebrate her latest moment in the spotlight, this time as executive producer and star of the HBO film “Confirmation.” That led Elle magazine to put her on its April cover, and Roberta Myers to throw a dinner at A.O.C. restaurant in Los Angeles to celebrate.

“I’m thankful to Elle for first putting me on their cover in 2012 when everyone was like, ‘Who is that girl?’” said Washington. The same could be said for Movado, which sponsored the event to celebrate Washington’s decade as its brand ambassador.

Anita Hill, who is portrayed by Washington in “Confirmation,” was also in attendance, along with the film’s director, Rick Famuyiwa, and co-star, Erika Christensen.

Asked about her reaction to seeing the film at Thursday’s premiere, Hill said, “I saw it not as an observer but as a participant. It was an episode of my life. But I think it’s relevant for a generation today.” Hill said she also made sure to bring some family members and those who were close to her at the time to the screening so that they could gauge what it was like to step back into the events that led to the media maelstrom. “It was amazing to meet her family and friends after playing her,” said Washington.

Christensen said she finally let out a sigh of relief when she met Hill and got her stamp of approval on the film. “I played her best friend without having met [Anita] until the premiere, so I was really nervous.”

Washington’s “Scandal” costars Bellamy Young, Darby Stanchfield and Katie Lowes also came to celebrate as did Ellen Pompeo. Said Lowes, “I’m so used to Kerry being Olivia Pope, woman in charge, so to see her transform into a small, meek, figure in ‘Confirmation’ was wild. She gave a great performance.”