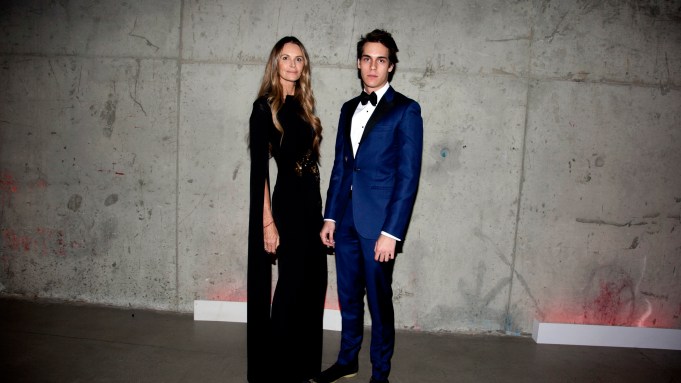 The famous Aussies of New York gathered Thursday night at Skylight Modern for the annual American Australian Arts Awards, presented by National Australia Bank. This year’s benefit recognized Elle Macpherson and Simon Baker, who were presented with their awards by Laura Brown and Hugh Jackman, respectively.

“The Australian American Association is something that is very dear to my heart, being an Australian and having made my career in America, over the last 37 years,” Macpherson said during cocktails. “And also to support art. It defies culture in the sense that it is sort of universal. It’s really fun to be here and everybody that bought a ticket for this is supporting a young artist in their field.”

She added, “It’s wonderful to see so many successful Australians here tonight. Being an Australian and owning an Australian company [WelleCo] and seeing it do so well. We feel very aligned with New York, particularly.”

She was there with her son, Arpad Flynn Alexander Busson, who was in town for the night.

“He’s in school in Boston so he has to be out of school in order to come,” she said. “But he has the day off school tomorrow so I said ‘do you want to come and be my date?’ And it’s nice for him to be around these kinds of events where we’re supporting creative people.”

Shanina Shaik and Naomi Watts were also in attendance.