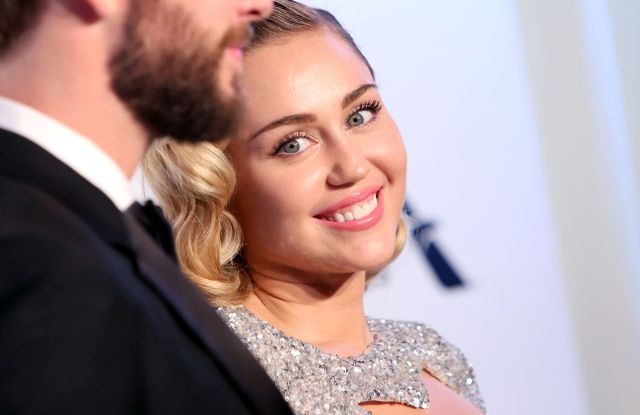 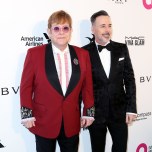 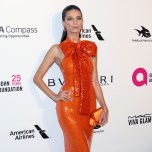 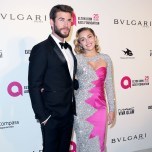 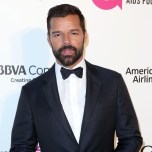 “Everything that they do is so admirable,” said Lea Michele as she arrived at the Elton John AIDS Foundation Oscar Viewing Party, the annual fund-raiser fete held in a tent in The City of West Hollywood Park on Sunday. “I’m speaking tonight with Chris Colfer from ‘Glee’ and we’re talking about ways that everyone can contribute. So we’re going to raise a lot of money and also get to celebrate all the incredible films and art made this year!”

The actress was one of the many perennial guests in attendance. Others included Miley Cyrus and her fiancé Liam Hemsworth, Ricky Martin, Caitlyn Jenner, Judith Light and Heidi Klum.

“I love celebrating with Elton John and David [Furnish],” Klum said. “They always get an amazing crowd together. They have a huge commitment to the cause. We love the parties, but we need to find a cure [for AIDS] soon.”

Busy Philipps was the rare EJAF virgin. “I’ve been dying for this invitation for years,” Philipps said. “I’m here to see the fashion.”

The party is a night of traditions. There’s always an emerging performer, a decadent meal and a guest list filled with returning players. This year was no different in those departments. The band Greta Van Fleet headlined. The Roca Brothers of El Celler de Can Roca in Girona, Spain prepared the five-course meal. And the usual suspects — from OGs George Hamilton and Lionel Richie to Olympians Maia and Alex Shibutani — all turned out. However, despite it being the event’s 26th year, there was still room for firsts.

Sir Elton John always arrives before the party begins in order to speak with reporters. But midway through the arrivals line, John uttered, “No, I can’t,” and hobbled inside. Moments later, his representative emerged and explained that John’s knee was bothering him after a recent procedure. But the consummate host didn’t leave the press high and dry. Instead, several small groups were brought to him, one at a time, as he sat on a plush chair and conducted interviews alongside his husband.

“It’s a long red carpet,” John sighed. “I just had some regeneration stuff done. I’m 71. I didn’t want to ignore you, so I just thought it would be better if I sat down and saw you.”

“Because we appreciate you coming out to support us,” Furnish added.

“I just couldn’t stand up any longer,” John continued, before the conversation pivoted to the topic at hand, his foundation and the fight against AIDS. “We hope by the year 2030 — well, I’ll be long in the ground by then — that the disease will go away. But I hope our sons will inherit our fundraising and our philanthropic ideals. They already are. As long as I can stand up and I can breathe – or sit down and breathe — I will be raising money for this cause.”

The Gucci-clad singer was quick to note that he was sporting various accessories by event sponsor Bulgari, including a brooch, rings, and watch. “These go back at midnight when I turn into a pumpkin,” he chuckled. “The earring is mine, but everything else goes back.” Following a stop at the Vanity Fair party, the plan was to head back to England that night.

Cyrus, Hemsworth and Martin joined John at his table, which was blocked by security, making it difficult for looky-loos. Jasmine Sanders arrived with Sofia Richie, who later joined her father inside. Elsewhere, Jaime King and her husband Kyle Newman sat with Lydia Hearst and Chris Hardwick. The cast of “Scandal” including Bellamy Young, Darby Stanchfield and Tony Goldwyn snapped selfies together at a nearby table.

Across the room, Michele enjoyed a “Glee” reunion with former castmates Darren Criss, Chris Colfer and Matthew Morrison. As for who might make her starstruck? “Probably someone from reality television,” she laughed. Lucky for Michele, there were also stars of that variety including “Real Housewives” personality Lisa Rinna with husband Harry Hamlin.

Guests enjoyed filet mignon while watching the Oscar ceremony on flat screens throughout the room. People could text donations throughout the night. Cyrus was among those who did. “I had a drunken ‘spell check’ moment on my last donation,” Cyrus texted. “So for that I apologize and donate another 5k. Thanks Elton for all you do! #DontBeCheap everybody donate! Love, Miley. Have fun.”

There was also a live auction which featured a Herb Ritts photograph, a Bulgari diamond necklace, and a Lalique crystal, which helped push the evening’s total to $5.9 million raised.

Later that night, Greta Van Fleet played an hourlong set with John joining them for two songs, John’s hit “Saturday Night’s Alright,” as well as the band’s single, “You’re the One.”

“It’s one of those overwhelming moments,” lead singer Josh Kiszka said. “Growing up, listening to all of Elton John’s stuff, and to have him call us was a full-circle thing. Our mother is a huge fan of his, so we brought all of our mothers tonight to this show and they were there yesterday at soundcheck and met Elton. Elton is a real tender guy. He makes you feel really welcomed as an artist.”

Cyrus and Hemsworth left before the Best Picture category was announced. Lionel Richie also headed out shortly thereafter. “It was a great night,” he called out as he left.