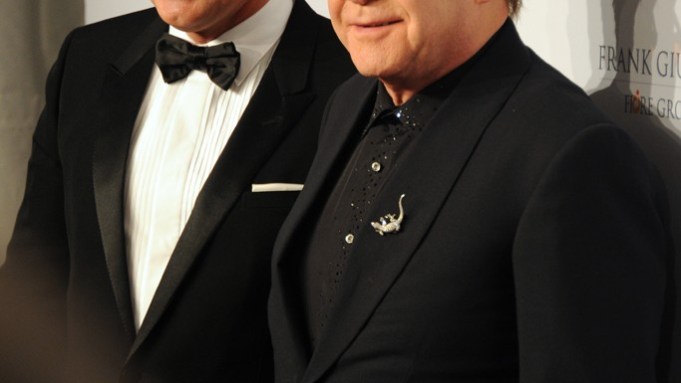 It was a big week for Hillary Rodham Clinton, who on Tuesday was honored at the Elton John AIDS Foundation’s 12th annual “An Enduring Vision” at Cipriani Wall Street, along with Ronald Perelman and Sandra Lee.

Anderson Cooper, master of ceremonies for the benefit for the past six years, was noticeably absent during red-carpet arrivals.

“I was supposed to be a guest here well into my third glass of wine,” said Matt Lauer, who stepped up to the podium after guests like Clinton, Sir Elton John, David Furnish, Gov. Andrew Cuomo, Alec and Hilaria Baldwin, Donna Karan, Lisa Marie Presley, Jeff Koons, Steven Klein, Hilary Rhoda and Allison Williams took their seats. “But this morning, as sometimes happens in our business, Anderson [Cooper] got called away for work. He said it was something about having to go to Washington to cover the story about the ongoing government shutdown, the impending war over the debt ceiling, the dysfunction that has this nation hurtling at breakneck speed toward a financial abyss, and thus, thrusting parts of the world into economic disaster…which sounded like a lame-ass excuse,” he said.

“How could [organizers] find another young, extremely talented, handsome, gay journalist with fantastic hair to host this event?” Lauer motioned to himself. “Boom.”

Rock band Heart, the evening’s scheduled entertainment, aroused some Eighties nostalgia among guests. Lee, who received an Enduring Vision award with fellow honorees Perelman and Howard Rose, said the band’s 1978 “Dog & Butterfly” album was the first one she ever bought. “I also loved Donna Summer, Joan Jett, Pat Benatar… I was into the girl rock,” she said. “The only thing that could’ve made tonight better was Cher.”

Perelman — who explained that his trip up the stairs was not due to drunkenness but to a herniated disc — spoke lovingly of his 30-year friendship with Sir Elton. “We’ve had similar paths over the last several years; a search for a happiness, since both of us f–ked up our lives along the way many times,” he said. “And it feels good and comfortable and content to be with somebody who loves you and who you love.”

All told, the evening brought in more than $3 million for the organization.