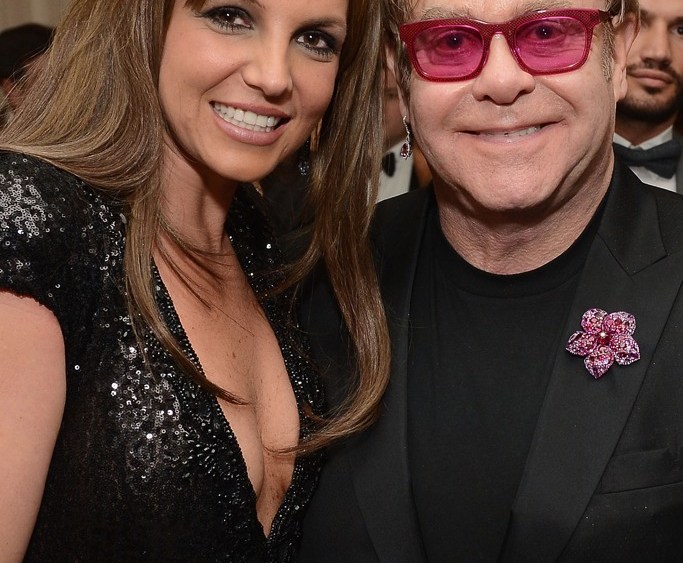 Hollywood types not lucky enough to nab an invite to the Oscars this year joined Sir Elton John and David Furnish in West Hollywood to watch the show in style. In its 21st year, the annual viewing party to benefit the Elton John Aids Foundation wined and dined guests with a dinner prepared by Gordon Ramsay, an auction and a musical performance by Emeli Sandé. The event raised more than $6 million.

Having a boys’ night out, Jim Carrey, Steven Tyler and Randy Jackson arrived ready to party. Carrey entertained the crowd with his quirky outfit — a black suit with taped angel wings on the back and fake rubber-footed shoes. Meandering over to the main table, the comedian shared some laughs and serious discussion with Bono, who was seated next to John.

Also in attendance were Chris Brown, Emma Roberts, Nicki Minaj, Anna Paquin and Stephen Moyer. Britney Spears, who was almost unrecognizable in a new brunette do, made a quiet entrance before heading to the main ballroom to see Sandé perform. As the music started, the singer whispered of her dress, “It’s Versace,” before heading closer to the stage with a friend. Her publicist later clarified that she was wearing Michael Cinco Couture.

The Kardashian sisters arrived sans beaus ready to have some quality time. “Lamar [Odom] couldn’t make it, so of course then Scott [Disick] didn’t come either. It’s a girls night!” Khloé said. Wearing an all-white Donna Karan gown. Kim leaned over Kourtney to catch up with Heidi Klum at the dinner table before posing for pictures with Miley Cyrus and Kelly Osbourne. Naomi Campbell also joined the girl-power table, chatting with Klum before Carrey poked some fun at the supermodel during the auction.

“I won’t start talking until Naomi throws her phone on stage,” he quipped.

Campbell laughed in good fun but couldn’t help blushing in the spotlight.

“He did not just say that. I’m so embarrassed,” she lamented to friend Quincy Jones.