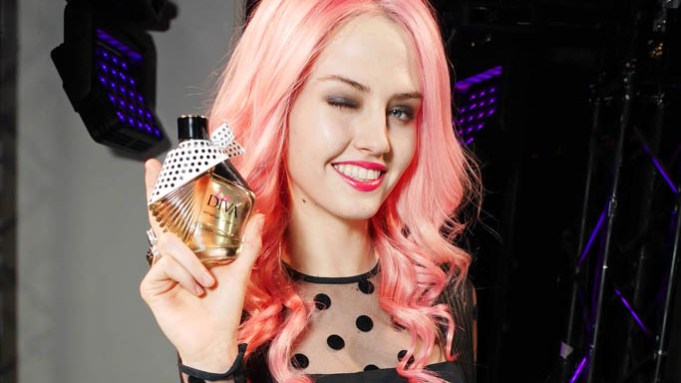 PRIMA DONNA: Emanuel Ungaro threw a birthday bash at the Petit Palais in Paris on Tuesday night to celebrate its 50th anniversary and La Diva, a new women’s fragrance.

Fronting the scent is Charlotte Free, who made a grand appearance in the museum’s great hall. The model known for pink hair got to keep her signature coif in the advertising shot by Billy Kidd, but had to rush for a last-minute touch-up before the shoot because it wasn’t pink enough.

“It was kind of a disaster,” admitted Free, whose tresses are now green, so she had to wear a pink wig at the event.

Free doesn’t consider herself a diva, per se, but said that being unafraid of putting her foot down could be misread.

“I’ve never been shy to say ‘I’m not doing that,’” she said. “I don’t like doing something that I feel is copying someone.”

The model feels copycatting is especially prevalent in fashion – for instance at a photo shoot where the aim is to recreate another photograph.

“I really don’t like that. I don’t think it’s necessary,” said Free, who’s been dabbling in music in her home base of Los Angeles.

Among the hundreds of guests were French actress Frédérique Bel, who will be seen next in “Les Visiteurs: La Révolution,” the latest installment in the hugely popular French film franchise about a time-traveling medieval nobleman and his squire, played by Jean Reno and Christian Clavier.

“I play a sort of punk actress with pink hair and see-through dresses with cleavage up to here,” she said, adding that her character is a member of the Merveilleuses, a fashionable aristocratic subculture after the French revolution.

“It’s funny because when I was filming it, I was also playing a Catholic fundamentalist in ‘The Student and Mister Henri,’ so it was very schizophrenic switching between the roles,” she added with a laugh.

French singer Élodie Frégé said she’s serving as a member of a jury on the television show “Nouvelle Star,” which identifies singing talent and whose new season is set to be broadcast on channel D8 starting Feb. 16.

David Downton was marking his 20th year illustrating the Paris couture shows. He plans to gather that body of work in a London exhibition.

“I came at the right moment by luck, not judgment, so I saw Galliano and McQueen come in and the retirement of Saint Laurent and Valentino, and the new Valentino – so it’s been this extraordinary passing parade,” he said. “I’m the luckiest person, and partly, I’m the luckiest because I know I’m lucky.”

Marie Beltrami’s hands were dripping with tiny gold mice, which decorated the rings she wore from her new jewelry collection. Beltrami said the eponymous line is available on her Web site, but that she’s not yet shown it publicly.

La Diva’s floral fruity gourmand fragrance, concocted by Firmenich perfumer Marie Salamagne, will be launched in France and Italy starting in March before being rolled out elsewhere.

Its positioning is younger than that of other Ungaro scents, explained Luciano Bertinelli, chief executive officer of Ferragamo Parfums, the Ungaro fragrance licensee.

“We are hoping to enlarge the consumer base, reach a new target,” he said.