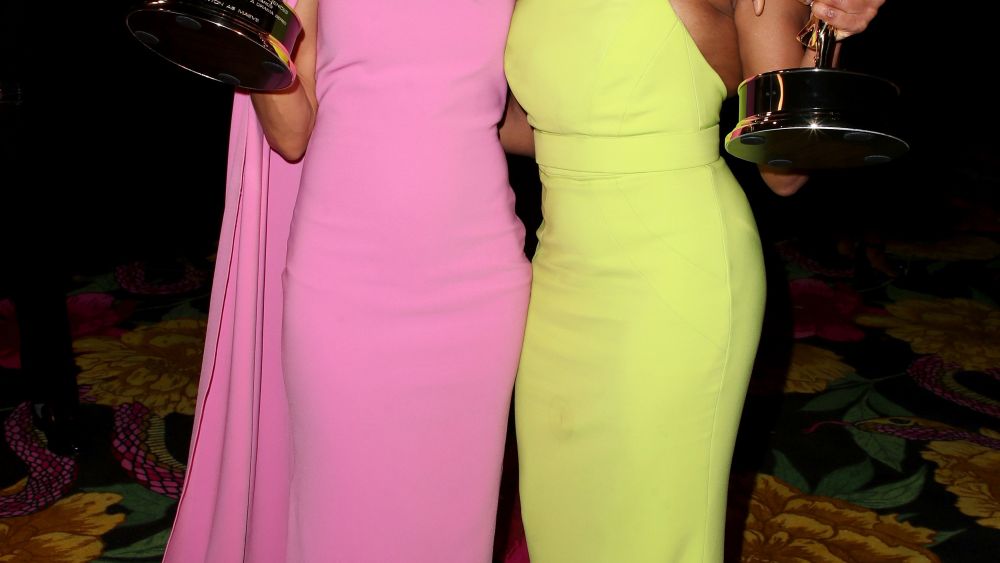 “We were very surprised,” Emilia Clarke said of “Game of Thrones” winning Best Drama Series at this year’s Emmys. The actress, clad in Dior, was flanked by her co-stars Nathalie Emmanuel and Jacob Anderson as they made their way inside HBO’s post-Emmy party held at the Pacific Design Center in West Hollywood. “We were ready to leave the auditorium and then we won.”

Even so, Clarke said her evening highlight was when director Glenn Weiss proposed to his girlfriend on stage while accepting his Emmy award. “I just thought it was so sweet,” Clarke said. “Everyone got to not think about winning or losing or presenting an award.”

Despite the impromptu moment, Clarke admitted award shows are typically quite status quo. “You sort of wish it could be like a reality TV show where like all the good stuff happens [when the cameras aren’t rolling],” she laughed. “Nah, you sit down and you’re like, ‘Oh, I’ll answer these text messages. Mum’s not looking on her camera. I can pick up the Instagram.’”

As for how the “Game of Thrones” cast is feeling about the show’s upcoming final season, Clarke said, “Everybody has done a lot of crying [while] filming the last season, so we’re all feeling very bittersweet, existential crisis-y.” Clarke joked that the cast planned to cope with alcohol, then added, “It’s going to be a long night.”

While it was a celebratory evening, Clarke’s co-stars were decidedly less chatty. Peter Dinklage, who picked up Best Supporting Actor, said he was feeling “great” as he attempted to go unnoticed behind the reporters and photographers. Meanwhile, Gwendoline Christie shrugged when asked about the show’s win. “I don’t have my publicist with me,” she said as she made her way inside the party where Kit Harington, Nikolaj Coster-Waldau, and novelist George R.R. Martin were already waiting.

Inside the “Garden of Eden” themed party, Laura Dern mingled with Zac Posen while Juliette Lewis found a friend in King. Elsewhere, “Curb Your Enthusiasm” stars Larry David and Jeff Garlin hung out at a VIP table. However, their co-star Cheryl Hines was forced to make it a early night. “I’ve got to go home right now and go to bed,” Hines said. “I have a table read in the morning for a film I’m directing. It’s a work day for a lot of people.” Even so, she said, “It was fun to see Larry David as a presenter. That’s a first. And probably a last knowing Larry. He’s a one and done type of guy.”

“Silicon Valley” actress Amanda Crew wore a sparkly silver suit to both the ceremony and party—although she couldn’t recall who made it. “My stylist will kill me, but I didn’t look at the name of it,” she said. “Me and Suzanne Cryer decided we didn’t want to wear dresses this year. It made for an enjoyable awards ceremony. Usually, I’m very uncomfortable, but this year, I was like, ‘Oh. This is why all the guys are happy. Because they’re comfortable.’”

Crew was eager to hit the bar after sharing that the Emmy Awards features a cash bar. “It was thirty dollars for one glass of champagne,” she said. “I was shocked. I’m so cheap. I was like, ‘I’m not doing that.’ But [my co-star] Josh Brener bought me and Suzanne a glass, so it was ninety dollars for three glasses of champagne. Fun fact.”

“Westworld” star Angela Sarafyan was also thirsty, but for a different reason. “I’m not drinking water tonight,” she admitted. “Obviously, I can’t sit on a toilet,” she added, referencing the train on her Christian Siriano dress. “It takes up a lot of space, but I was able to sit on one chair and put the train on three other seats. I was literally blocking the aisle. Totally worth it. I absolutely love this dress.” Sarafyan said “only a few people” stepped on her train. “One of them said, ‘Are you sure you’re happy about the choice you made?’”

Conversely, “Better Call Saul” actress Rhea Seehorn chose comfort by the end of the night. “I had heels on, but I gave up,” she said, lifting her red Oscar de la Renta gown to reveal platform sneakers. “I’m done,” she added. Nearby, her co-star Bob Odenkirk said he looked forward to letting loose. “No stress for me tonight,” he said. “One of the great things about show business is that over the years you meet and run into so many people. At parties like this, you see old friends from 20 years ago. I wrote on ‘SNL.’ I shared an office with Ben Stiller. We were backstage tonight all night hanging out.”