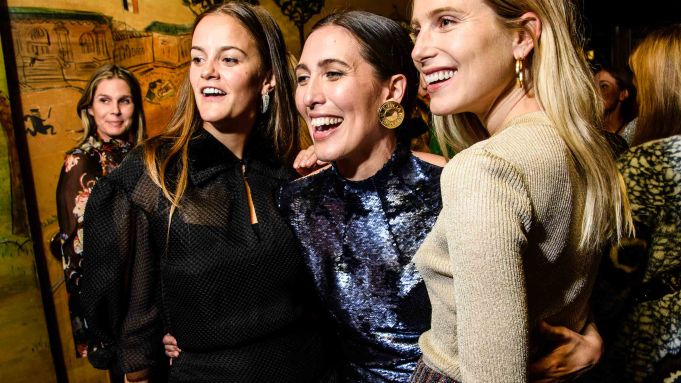 “It was all about the Jazz Age,” said Emilia Wickstead. “The celebration of dance, music and the costumes that they wore and the sparkles and the stretch and the fun and how fashion changed in the 1920s.” The designer was referring to her new capsule collection with Net-a-porter — one of a series of party capsules the e-retailer will be releasing throughout the upcoming season.

The idea for a party capsule materialized after Wickstead and Net-a-porter president Alison Loehnis bumped into each other on the streets of London. “I’m like, ‘Are we gonna actually share the true backstory of the collaboration?’” joked Loehnis at the launch party on Tuesday night. “Literally, I live in London and I was walking down the street, I ran into her and she’s, like, ‘Come into the store for a second.’ We had a chat and then all of a sudden we just start riffing. She’s, like, ‘What about something party? What about something with some sparkle?’ That’s where it all began.”

The six-piece collection includes four dresses, a miniskirt and a shirt in metallic jerseys and sequins. To go with the theme of “old New York,” Wickstead and Loehnis hosted the launch party at The Carlyle hotel, inviting guests — Nicky Hilton Rothschild, Dree Hemingway, Charlotte Santo Domingo and Hannah Bronfman among them — for cocktails at Bemelmans and dinner in an adjacent room. The table setting was complete with viewfinders that showed inspiration images for the collection.

Wickstead said she designed the collection for the modern girl on the go. “I love the balance and the juxtaposition of either having it high at the front, low at the back or short with a long sleeve and a high neck,” she shared. “It’s about having that nice balance. I think that’s the answer to today’s modern girl who is on the run. She’s throwing on something before she goes out, but I still believe in the glitz and the glamour of everything and making that come to life.”