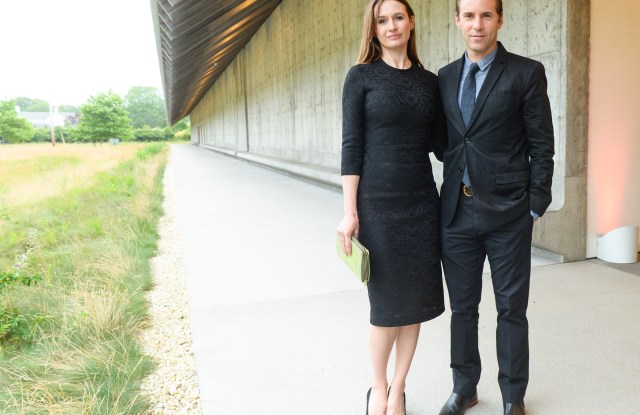 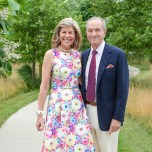 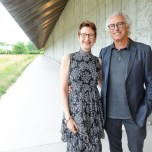 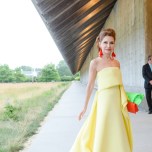 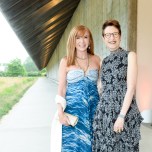 “It’s like Burning Man on water,” said one attendee of the madcap, helter-skelter mounting — which chronicles alternative waterfront-inspired works. While a respite for the rich and rowdy, the Hamptons has also historically served as a haven for artists, including Jackson Pollock and Willem de Kooning.

Actress Emily Mortimer — an honorary co-chair for the evening — presently owns a cottage in Amagansett with her husband, actor Alessandro Nivola. “[Art] is such an important part of the tradition of this place — when I was first coming out here that’s all I knew. I didn’t really see this other thing,” she said of the other side of the East End’s activities.

“We never went to a restaurant, and just stayed in the house and went to the bay and I just thought it was the most magical place on earth. It wasn’t until we bought [a house] and I started going for a cappuccino that you realize it can be dangerous. You have to remember to just stay in the home sometimes. There is that side of it but you just have to sort of find your way, there are places to be safe,” she added.

Miller has found solitude in the water, where “I water ski and wakeboard everyday. My family is really into water sports.” A longtime resident, she’s found that the Hamptons’ social media buzz has made weekend traffic more untenable than ever. “It’s a little nerve-wracking,” she admitted.

Sotheby’s jewelry sales director and vice president Frank Everett chalked the Hamptons’ popularity up to a matter of convenience. “The proximity to New York, there are a lot of beautiful vacation places to go, but you have to remember, people are working, and they can come in and out of New York so fast. Those fortunes aren’t made on their own.”

Everett resounded what is much-whispered in New York as of late — that the typical summer slowdown is not on the books for 2016.

“I don’t know if it’s the election year or if it’s the economy, but it does seem that people are not leaving early on Friday, not taking every single weekend off – it’s a hard-working summer [this year].”