May Kwok, Natalie Joos and more turned out to mark Primark's Stateside expansion. 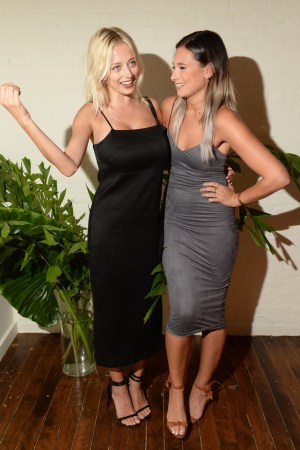 Emily Ratajkowski may have risen to fame by taking off her clothes in Robin Thicke’s “Blurred Lines” music video (72 million views and counting), but these days, brands are tapping her to put them on. Primark, the Irish fast-fashion label opening stores Stateside next week, is the latest.

“They talked to my manager and I was like, ‘I absolutely want to come,’” she explained of the arrangement, though Primark’s top dogs were eager to point out that Ratajkowski does have an Irish connection — her parents spend half their time in the country.

“I’m actually going to Ireland to see my parents [next week], so I’m skipping half of fashion week,” she continued. “Obviously it’s cool that this brand I knew in Dublin is opening a store here, that’s really exciting to me.” ‘Here’ is a relative term for the model, to be clear — the stores are opening in Boston, Staten Island, Freehold, N.J., and King of Prussia, Pa.

It was a slow Wednesday night, as most nights are the week before New York Fashion Week, and Ratajkowski was in the West Village celebrating the Dublin-based brand’s foray into the U.S. After posing for the paparazzi in her $13 Primark skirt, scrolling through her phone — at the dinner table, no less — for gossip stories about her knockout body and scores of tagged posts on Instagram, the model and actress called it a night shortly after the salad course.

Natalie Joos, May Kwok and Fern Mallis stuck around, plus the Primark suits of course.

Meanwhile, Caroline Vreeland was looking ahead to a packed fashion month. She’s plotting to release the first song of her new EP in New York, the second in Milan, and, “When I’m in Paris either the third song or the whole EP,” she said. “We’ll see how it goes.” Sigh. The life of the jet-setting fledgling singer-songwriter.

She’ll also be filming a two-hour special with ABC about fashion week and performing at the Swarovski Anniversary party in Paris.

“I’m going to be wearing Alexandre Vauthier,” she said, “which is obviously my life.” Obviously.