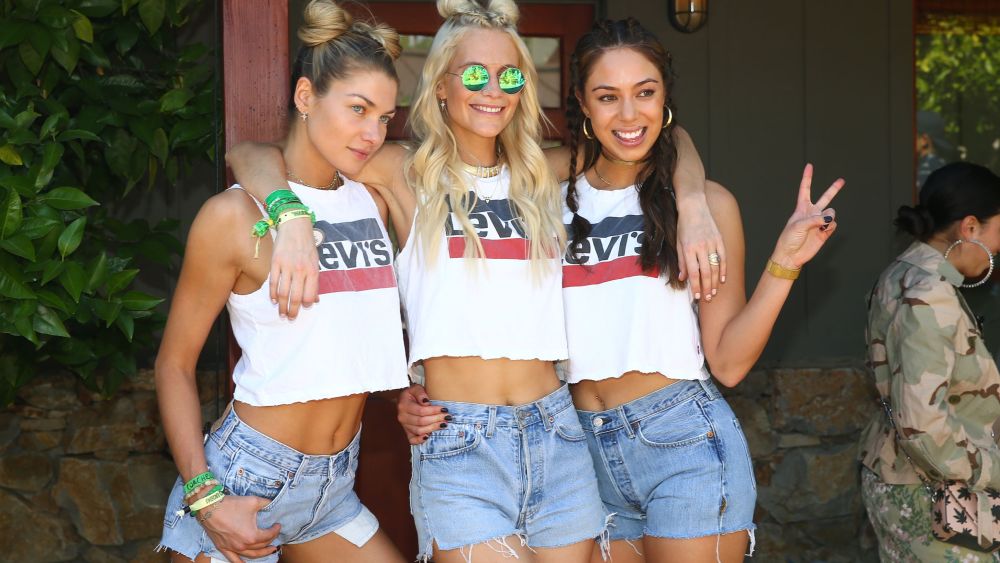 Amid the pool parties on steroids and the late-night ragers Coachella Weekend One is known for, Levi’s offered a laid-back afternoon alternative to the festival madness on Saturday with a hosted brunch at the Sparrows Lodge in Palm Springs.

Apart from being fun and generous, it’s a surefire way to ensure that everyone will be sporting a red or orange tab on their chest or posterior for the duration of the weekend.

“I did a denim tuxedo and did a bunch of embroidery,” said Ratajkowski, who came with several friends. “Maybe I’ll wear it out tonight, we’ll see. I am actually not going to the festival tonight, just chilling keeping it easy.” By “chilling” she meant hitting up the Moschino party, which featured a not-so-low-key set by Lil Yachty, most of whose lyrics can’t be printed here.

Chung also sang along with her share of songs on Friday night, resulting in a mild case of laryngitis at the brunch. “Two days ago I had a tickle in my throat and then singing along to Radiohead last night put me over the edge,” she said.

The British band caused an unwanted stir on the first night when their header concert suffered two power outages. “You know what? After everyone left, you were able to come close to the stage and then you realized it was a super intimate concert they were doing for their fans at a massive festival. From afar, it’s a weird show but as soon as you came up you felt it. It was magical,” Chung added.

Knowles, who, like the rest of the world, had been expecting to see her big sister Beyoncé perform at the festival, also stood up for Radiohead. “It was a great show. As a performer who’s played at about 75 festivals, I know these things can happen. You just have to roll with it and keep feeling the good energy.”

Abloh, another multihyphenate, summed it up best when he said, “I think Coachella on the global calendar of events and weekends is very important in terms of culture and fashion. You have Glastonbury, Art Basel, the fashion weeks — those are our current generation’s communal gatherings of people who are at the forefront of culture, so I love Coachella and what it represents.”

The 36-year-old, who laughed, “I’m deceivingly not young. It’s about your mind-set,” said that Millennials don’t like to be pigeonholed into one profession. “With the Internet, and creative expression being so easy, it just made a platform where you can believe in yourself. I subscribe to that as well, where you can do whatever you put your mind to.”

He was gathering music and design inspiration even as people were munching on omelets and watermelon slices under the pergola. “Yeah, 100 percent. I’m seeing what people are wearing, what music people are into, what shows they are going to. I’ve always been one to have to be in it to design from it, not…looking at photos of kids at Coachella to understand what the nuances are.”