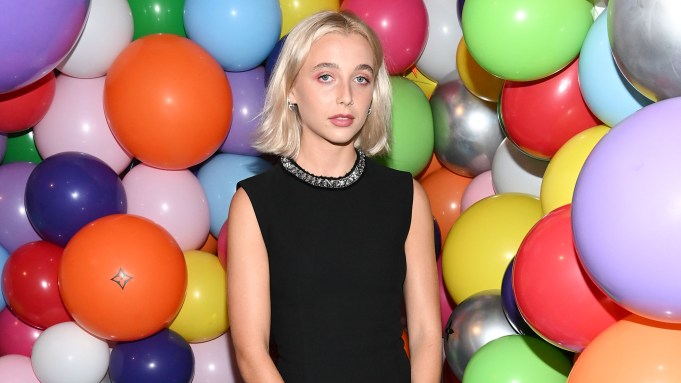 “I have a deep appreciation for things that have stood the test of time,” said Emma Chamberlain at Louis Vuitton’s “200 Trunks, 200 Visionaries: The Exhibition” in Beverly Hills — a celebration of the French designer’s bicentennial birthday.

“This was my first view of anything,” she said of visiting the space, held at 468 North Rodeo Drive — LVMH Moët Hennessy Louis Vuitton’s 22,250-square-foot pop-up space set to become a Cheval Blanc hotel. The luxury house tapped diverse creators and thinkers across art, science and pop culture to reimagine the Louis Vuitton trunk. “I loved it. I love this venue. It’s such a perfect place for this.”

She particularly loves Benji B’s creation, a trunk with an exposed music box inside. Playing sounds, it’s placed in the center of a room covered in red velvet. The music curator, along with architect Frank Gehry and Robert Moy’s Brooklyn Balloon Company, has a dedicated section within the exhibit.

“I loved how many different types of trunks there are,” continued Chamberlain, a face of the brand. The entrepreneur and content creator, who rose to fame on YouTube, has been a regular at Louis Vuitton events since 2019. “It’s really cool to limit an artist in a sense and say, ‘You have to make art, but on a trunk.’ And then see what gets created out of that.”

Free to the public through Sept. 6, exhibitors include Gloria Steinem, BTS, Alex Israel, Hans Ulrich Obrist, Peter Marino, The Simpsons and Lego — whose birthday cake creation is front and center at the entrance.

With her pick of looks, Chamberlain opted for a black minidress.

“I had two outfit options that I was choosing between,” she explained. “One of them was more casual, and I was like, ‘You know what? I wear casual all the time. I want to do a little cocktail dress feeling.’ I don’t do this very often in my day-to-day life, and I wanted to wear something I wouldn’t normally wear.”

She accessorized with a trunk-inspired clutch and platforms.

“This is super cool, because it kind of has this travel-y feel,” she said of the bag. “I had to wear a baby trunk. I love this. It makes me feel like a little travel trunk. And these heels are insane. I can’t. I love these shoes.”

Dever, standing nearby, had on the same pair.

“OK, see, I don’t know why we wear any other shoe,” Dever said with a smile. The actress, who’s received critical acclaim for “Unbelievable” and “Booksmart,” plays the daughter of George Clooney and Julia Roberts in Ol Parker’s “Ticket to Paradise,” out in October, and will star as the lead in Karen Maine’s Shakespeare-inspired “Rosaline.”

“They’re comfortable,” she continued. “I’ve been walking around all night. I could go for six more hours. It’s great. And also, height never hurt anybody. I’m short. I’m 5’3″. It’s not great, and I need a platform. And this Vuitton shoe is absolutely perfect. It’s crazy.”

Working with stylist Ryan Hastings, she decided on a long vest with a plunging neckline, adorned with sparking details, and structured pants.

Coincidentally, that was the inspiration behind one of the trunks: Alborzian’s creation, an open box looking into a representation of Shiva Shakti — the perfect union and balance of male-female energy in yogic philosophy.

“The idea was, it’s blank on the outside, you have to go inward,” Alborzian said. “When you open it up, you see both femininity and masculinity in its form. It’s in a tantric form. There is no difference between anybody. We are masculine and feminine. We are not just male and female.”

A former model, who’s worked with the likes of Madonna and Naomi Campbell, Alborzian is a yoga and Ayurveda therapist based in Los Angeles.

“Because we live in a material world, it’s important to bring things to the material level. That’s where people connect these days. Hopefully, it gets people to think,” he said of his piece. “I like the surface, but the surface doesn’t last. So, I’m very much about, let’s begin at the surface, where we connect, and then let’s let ourselves sink into it — see all of these creations and ask, ‘What is the deeper meaning behind each one of them?’”

Dever resonated with the work of Jakub Józef Orliński, a Polish operatic countertenor singer. Inspired by “the extreme value of the unit, of singular people like Louis Vuitton,” Orliński has said the piece is “based on the feeling of uniqueness.”

“The trunk had a quote on it that said, ‘There is only one me, one time,’ which I really appreciated and thought was really meaningful,” Dever said. “He sheds light on how fragile humanity is.”