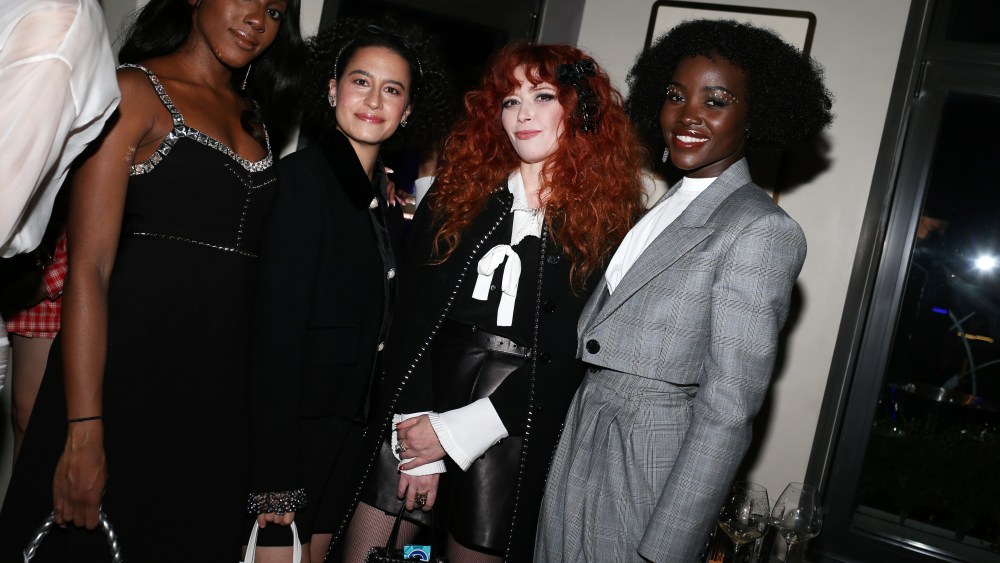 If you’re looking to dance the night away with starlets of HBO and Netflix alike from the 63rd floor of a Financial District tower, all while the Secret Service looks on, then does Miu Miu have the place for you. New York’s hottest club is Miu Miu Nuit Club, one night only for the young and fabulous of New York City.

On Tuesday night the lobby of 70 Pine Street, an Art Deco building in lower Manhattan, was buzzing with the clack of Mary Janes and the sparkle from many a bedazzled hair clip, caught by the paparazzi’s light. Once coats were checked and pictures snapped, guests boarded elevators up to the 63rd and 64th floors, where the proprietors behind Crown Shy have opened Saga restaurant, on 63, and cocktail bar Overstory, on 64, with dazzling views of New York and drinks aplenty.

Rainey Qualley was behind the turntables playing songs like Celine Dion’s “It’s All Coming Back to Me Now” and Justin Bieber’s “Sorry” (who can resist the “Purpose” album?), with Dorfman joining her in the booth for a mid-set dance party. New face Pauline Chalamet, who stars in Mindy Kaling’s new HBO series “The Sex Lives of College Girls” and, yes, is sister to Timothée, took in the party confidently, pulling off Miu Miu in stride. Ever Anderson, the 14-year-old daughter of Milla Jovovich and Paul W. S. Anderson, arrived with a chaperone. Dorfman, meanwhile, came in with “The Crown” star Emma Corrin, who is still a relatively new face on the scene but a fashion star already. She daringly was wearing the controversial uber miniskirt from Miu Miu’s latest runway show, and setting quite a high bar for whomever the next celeb is to attempt the look.

Emhoff and her boyfriend, GQ editor Sam Hine, clung to one another with a drink in hand, as a Secret Service member looked on stoically from the sidelines. At one point Emhoff planted a kiss on Hine’s cheek for the camera.

For most, though, it was more of a girls-night-out kind of evening. Harley Viera-Newton and Sarah Hoover held center court at a table in one of the rooms, while Lister-Jones made a beeline for Lyonne upon arrival.

Eli Brown, one of the “Gossip Girl” lads and a ubiquitous face on the New York party scene this fall, was heard inquiring after a smoking section. Sadie Sink, meanwhile, accepted compliments for her role in Taylor Swift’s new “All Too Well” video but declined, via a publicist, to chat with press.

The most seasoned actresses at the event, Lyonne, Nyong’o and Glazer, hung together in a trio as the party swirled around them. As they turned to pose for a photo, Ziwe stepped away from the pair she was chatting with to join the op, then as soon as the photos were done disappeared without a word, back to her original group.

A Look Inside the New York ‘House of Gucci’ Premiere

Holly Humberstone Is the Latest ‘It’ Brit Songwriter to Know

Billy Porter Returns the Favor for The Andy Warhol Museum