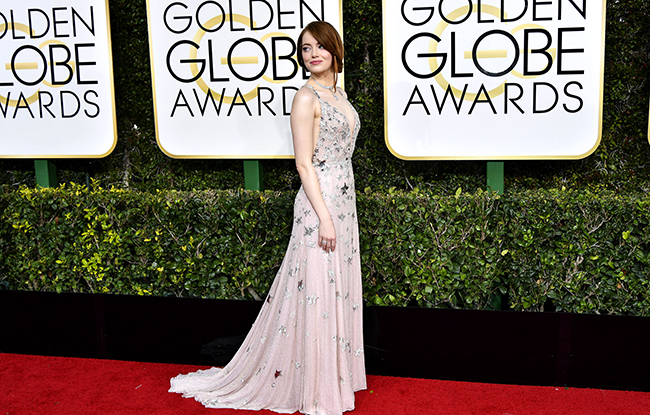 While most of the stars on the 73rd Golden Globe Awards red carpet were a blur as they rushed by, late for the ceremony, there were a few dresses that made more than a momentary impression. Nicole Kidman in a sparkly caged bodice by Alexander McQueen, Zoe Saldana in a berry-hued frilly Gucci gown and Hailee Steinfeld in a custom lavender chiffon Vera Wang, for instance. The red carpet has become such a frenzied alley of celebrity gridlock that many nominees and presenters can’t stop and chat, so the ones who do make sure their words count.

Amy Adams, sidling up to reporters just as Tom Ford was stopping to do interviews, launched into praise for her “Nocturnal Animals” director — and designer of her dress — without even realizing she was standing next to him. “Oh, there you are,” Ford said, patting her arm. “Huh, who’s that?” she said, feigning ignorance. While it was hardly a surprise that she would wear Ford to the show, Adams said, “He has such a great eye and does such a great job for each person. This is a dress I’ve never seen before [although the world has seen its share of sequined columns] and it feels so organic in a way to me, even though I’m so outside of my comfort zone.” While Adams was up for best actress for her other film, “Arrival,” she said, “It’s been overwhelming in a positive way. Each film is so supportive of the other, so it feels like it’s brought this family of filmmakers together.”

Picking up where Adams left off, Ford said, “Well, hello, it’s all about strong powerful women.” When asked about his refusal to dress Melania Trump, Ford corrected the reporter, saying, “I said I would not have dressed Hillary if she became president, either. I think whomever is president or the first lady should be wearing clothes at a price point that is accessible to most Americans and wearing clothes that are made in America. My clothes are made in Italy and are very expensive and I don’t think most women wear them in our country. The first lady or the president should represent all people. Especially given this president’s beliefs about Made in America.”

When pressed about his next project, Ford threw up his hands. “Oh my god, isn’t this enough? My brain is filled. I’m on my way to Italy on Wednesday because I have a men’s collection I am showing the following Monday and I have a women’s collection that I am showing probably in Italy as well, we’ll see. Hopefully another movie in the works.”

Just then, Jessica Biel and Justin Timberlake (who was wearing a Ford tux) caused spectators in the bleachers to break into ear-piercing screams. Ford joined in for a moment, before confirming that he is not, contrary to reports, showing his women’s collection in L.A. next month. “That rumor seems to be abounding but no. Perhaps in Italy; I haven’t decided actually.”

When asked if being a Golden Globe nominee is as nerve-wracking as staging a runway show, he said,
“They are totally different. You don’t have to get up and talk at a runway show and you don’t have to worry about whether you are going to win because you have your show. But of course you are nervous here because if you lose that’s going to be sad, but if you win you have to get up in front of a bunch of people and make a speech and sound intelligent so, yes, I’m terrified.”

Best actress nominee Jessica Chastain, in an embellished periwinkle Prada column, came along next, and picked up the same theme as Ford. “We need those strong women out there, right? Everyone keeps asking me why I always play these strong female characters and for me every woman I’ve met is strong so it’s such an absurd question because I’m just playing a real woman. I’m excited to find characters that challenge the status quo of how we imagine women who are supposed to be.”

Sarah Jessica Parker lingered longer, relishing being back at the Globes after the “Sex and the City” days. “I haven’t been here in a long time and this show is so special. Every event deserves thought. I want to respect the occasion,” she said of choosing her Vera Wang ballgown. “I actually saw an image of this dress and it was the fastest seduction — meteoric really. I couldn’t imagine someone hadn’t already claimed it. Vera’s team completely rebuilt it for me because this was the only sample. It’s really amazing the quality and the ease with which they do the work. I don’t typically wear this color but I fell in love.” The ivory was in fact a touch wedding-like, but SJP pulled it off.

Another nominee, Issa Rae, also chose white to signify her first time at the Globes. “White felt like a good introductory color,” she said. “But after tonight, I am no longer a Globes virgin.”