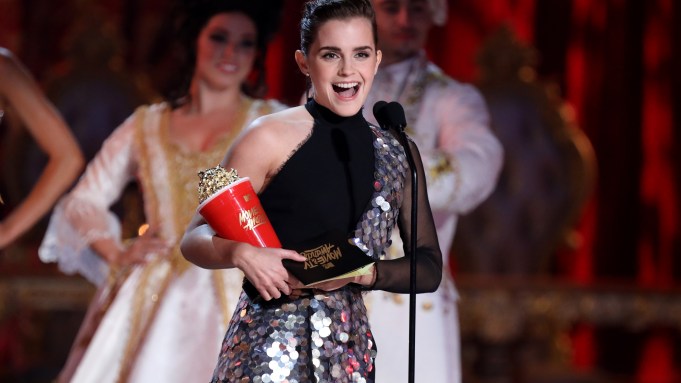 “I mean, thank you to [my publicist] Christine for holding an umbrella over my head,” Hailee Steinfeld laughed, as rain poured down on the untented MTV Movie & TV Awards red carpet in Los Angeles. The actress-turned-musician attended in honor of her nomination for “Edge of Seventeen,” as well as to tout her latest single, “Most Girls.”

“I like to think of it as a progressive way of thinking,” she said of the song’s mantra. “I, along with other people that I know, are guilty of waking up in the morning and feeling like ‘I want to be me. I don’t want to be like anybody else.’ I want to be the only version of me that exists.” She paused, as the rain came down even harder. “It’s really coming down now, so we’ll see what happens in the next, like, two minutes,” Steinfeld laughed. Right on cue, it began hailing. As the red carpet became a slip-and-slide, she and her peers Yara Shahidi and Joe Keery ran for cover in a parking garage nearby The Shrine Auditorium, where the live ceremony was held on Sunday afternoon.

Rebranding itself as the inaugural MTV Movie & TV Awards, the live show attracted a trifecta of talent from the worlds of film, television, and — true to its roots — music. Despite the unseasonably rainy afternoon, the event still managed to draw Cara Delevingne, Zac Efron, Zendaya, Emma Watson, Hugh Jackman, Vin Diesel, Allison Williams, Millie Bobby Brown and Issa Rae inside the theatre.

Steinfeld’s co-star Haley Lu Richardson attended with boyfriend Brett Dier who stars on “Jane the Virgin.” “It’s cool that they’ve combined the two because he’s on a TV show and I’m in a movie that’s nominated, so now we both get to be here together and make it a date night,” the Marc Jacobs-clad actress said, adding that they pseudo-coordinated for the event. “My boyfriend is wearing a Pac-Man suit to an awards show,” she quipped. “We found his suit in Austin in a costume shop called Lucy in Disguise with Diamonds, so I was like, ‘I have to find something that’s also fun.’ I didn’t want to wear something boring next to him. We’re both funky.”

Pre-hail storm, plenty of MTV veterans had already skipped the carpet while newcomers like Storm Reid proved eager to experience the event from start to finish. “It’s my first time here, so I’m a little nervous,” said the 13-year-old, who stars in the film “A Wrinkle in Time,” out in March of next year. “I want to meet everybody. I want to sit there and watch like a fan.” The poised young actress wore Self-Portrait and discussed what it meant to her to be a part of the film with director Ava DuVernay and actress Oprah Winfrey. “It means everything to be the first young black African-American to be leading a sci-fi film,” she said. “It’s a blessing.”

A Fendi-clad Amandla Stenberg hit the preshow with her “Everything, Everything” co-star Nick Robinson to present a clip from their film. “Unfortunately, I won’t be able to stay for the actual awards because I’ve got to go catch a flight back to work,” said the 18-year-old, who flew back, minutes later, to Atlanta where she’s filming Fox’s “The Darkest Minds.” “I’m really, really excited for people to see the film. I think it’s going to be important in monumental ways. We haven’t been able to see black girls carry films in this way before.”

After the torrential downpour, event organizers directed stars to the rain-free press room where stars like Efron, Delevingne and Zendaya posed. From there, the show’s host Adam Devine, from the “Pitch Perfect” franchise and Comedy Central’s “Workaholics,” kicked off the event with a musical number set to “Beauty and the Beast”’s “Be Our Guest,” featuring cameos by Steinfeld, Chrissy Metz, Rebel Wilson and Josh Gad.

The broadcast also included performances by Big Sean; Noah Cyrus and J Balvin; Pitbull and Camila Cabello, as well as previews of summer blockbusters including “Transformers: The Last Knight,” for which Mark Wahlberg was on hand; Stephen King’s “It” reboot with its young cast in attendance, and “Spider-Man: Homecoming” with Tom Holland and Zendaya.

Meanwhile, the network created two new categories: Best Musical Moment and Trending, a move to bridge any generational gap for viral and online-skewing audiences. MTV also included the first “Best Actor” award, combining all genders and based solely on performances instead of sex or gender identity.

“I’m superexcited to be here presenting this award,” said Asia Kate Dillon, a gender non-binary actor who stars on “Billions.” Watson wound up winning. “To me, it indicates that acting is about the ability to put yourself in someone else’s shoes,” Watson said, as she accepted the golden popcorn award from Dillon, “and that doesn’t need to be separated into two different categories.”