The event was sponsored by L'Oreal and Audi. 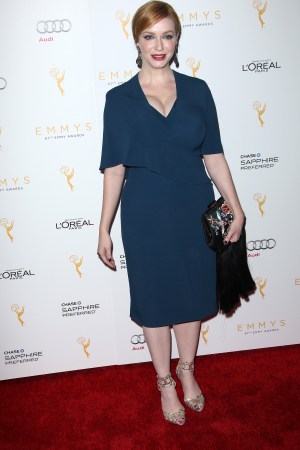 “I literally got off a flight from England two hours ago and I have to leave tomorrow night to get back for filming, so I don’t think tonight will be very late. But I will still enjoy it,” explained Froggatt, who said she selected her two looks — the evening’s Naeem Khan and tomorrow’s J.Mendel gown — with the help of Brad Goreski. As for looking so fresh-faced, she laughed, “I’ve had some time in hair and makeup, which helped a great deal. I didn’t look like this when I stepped off the flight.”

Broadway actor and first-time Emmy nominee Burgess of “Unbreakable Kimmy Schmidt” had also just flown into town from New York and planned to make it an early night. “I am such a grandpa,” he said, adding that the after party would take place at his hotel. “My boyfriend and I are in the middle of season three of ‘The Good Wife.’ I’m obsessed. I’ve gotta go find out what Julianna Margulies is about to do next.”

In honor of his Netflix show’s viral hit, “Pinot Noir,” Burgess wore a custom-made tie by Queens, N.Y.-based artist Nicholas Ruiz made from recycled cork and glass. “I met the artist at a bar. He builds bow ties out of found material.” Still, the actor stopped short of calling himself a fashion guy. “I can appreciate fashion, but I need other people’s help. Sam Spector styled me.”

Elsewhere, “Transparent” creator Jill Soloway kept close to Hari Nef. “She’s a supermodel,” said Soloway. “I’m a true slash,” countered Nef. “An actress-slash-model,” explained Soloway. “She’s in season two of ‘Transparent.’ We made a deal in the car on the way here that we’re going to bed by 11 and only drinking water tonight.” Added Nef, “And pressed juices. I’ve got a dress to wear tomorrow.”

Despite the long day ahead, Christina Hendricks and her husband Geoffrey Arend laughed off the idea of a curfew. “You know, I was about to give ourselves a cut-off time,” she said, “and then I knew we wouldn’t listen to it anyway. So I’m just going for it. It’s the last time around for ‘Mad Men.’ It’ll be celebratory either way.”

Allison Janney admitted that she still gets pre-Emmy jitters. “That red carpet is daunting to me,” she said. “I feel like I should be better at it,” she said. “Black-ish” actress Yara Shahidi added, “I’m still trying to figure out the purpose of four outfits in a day.”

But “Orphan Black” star Tatiana Maslany was thinking about food, not fashion. “The parties have not had a lot of food, which is stressful, so hopefully tomorrow has a bit more food. I’m going to stock up before we get there,” she said. “I don’t expect this to happen again, so it’s going to be fun to enjoy it for what it is.”