The stars came out in droves for the award-show bash. 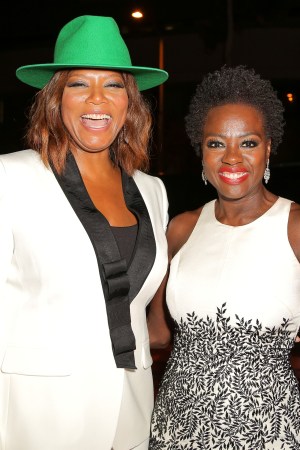 Sunday was a record-breaking night for HBO, with 43 Emmys to its credit, and the amount of gleaming winged trophies strewn throughout the cable network’s lavish after party at West Hollywood’s Pacific Design Center constituted an embarrassment of riches, especially for “Veep” star and Best Actress in a Comedy winner Julia Louis-Dreyfus.

After she’d clinked trophies with co-star and fellow winner Tony Hale (who snagged the Best Supporting Actor in a Comedy Award), Dreyfus’ hardware joined an array of a full dozen Emmys on a single table culled from HBO’s various victors, including a plethora awarded to the miniseries “Olive Kitteridge.” And when Louis-Dreyfus was ready to limo off to the next party, it took more than a few moments to figure out which Emmy belonged to her.

Before he was joined inside by his “Olive Kitteridge” costar Frances McDormand, Best Actor in a Miniseries Richard Jenkins marveled at just how great the material, sent to him by his pal McDormand, had been. “Only a couple times in my life have [I] read something and just went, ‘Really? Really? This is that good?'” said Jenkins. “I tip my hat to Fran because it was her baby. It turned out even better than I thought it would.”

And that was on just one side of the expansive room. Across the way, another dozen trophies had been claimed by “Game of Thrones” — the most by any series in a single year. As Peter Dinklage, the drama’s Best Supporting Actor winner, proclaimed as he entered the party clutching his trophy triumphantly, “Yeah!”

Other stars from the show gathered to celebrate victory: a hard-to-miss Gwendoline Christie collected well-wishes from “The Good Wife” star Alan Cummings, Lena Headey relaxed on the patio after a quick change out of her Zuhair Murad gown into a simpler, flowing frock, and the show’s teen stars Maisie Williams (who’d slipped into post-awards tennis shoes) and Sophie Turner rocked out to music in between selfies. But it was an extra special occasion for George R. R. Martin, the author of the books the series was based on and a writer on the show: The day marked his 67th birthday (the same age as the Emmys themselves) and he was rewarded with both a trophy and a birthday confection whipped up by the party’s caterers.

There were plenty of non-HBO luminaries working the room as well: “How to Get Away With Murder” star and Best Actress In a Drama winner Viola Davis held court in a blood-red banquette savoring her dessert; “Scandal” star Kerry Washington and her mom; and the Hough siblings Derek and Julianne — Emmy winners for their choreography on “So You Think You Can Dance” — livened up the dance floor.