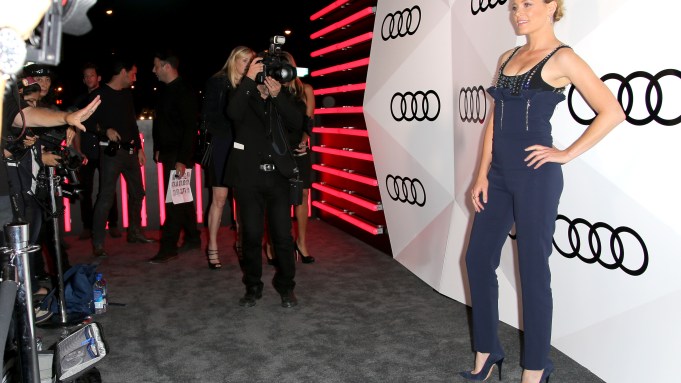 “This party is the best because it kicks it off,” said Constance Zimmer before heading to the rooftop of Catch LA restaurant for Audi’s annual pre-Emmy fete. “You get to have fun and be excited about the weekend. I get to see all of my friends. We get to talk before everybody’s super stressed.”

The “UnReal” actress, who received her first Emmy nod for outstanding supporting actress in a drama series, was among a handful of nominees at the soiree, such as Carrie Preston and Melora Hardin, who either already had their moment at the Creative Arts Emmys the weekend before or were still waiting for the big day on Sunday.

While it’s hard to ignore the win-lose culture of awards shows, Zimmer took the safer route. “I have that horrible cliché,” she continued. “I shouldn’t say it, but I do feel like I’ve already won. I’m just going to the event and soaking it up.”

Although she didn’t take home the Primetime Emmy for Outstanding Guest Actress in a Comedy Series for her work on “Transparent,” Hardin echoed, “I do feel like a winner,” even though she had some suggestions for the Television Academy.

“I feel frustrated by the category,” the actress noted. “I actually think it’s two categories. I feel like Laurie Metcalf, Christine Baranski and I were in the guest star category and I felt like Tina Fey, Amy Poehler and Amy Schumer were in the hosting category, which is a really different skill set. It’s sketch comedy. It’s completely different than creating an arc of a character that was in a show that was supporting a narrative. So I wish that there were two categories.”

Another tried-and-true awards trope: actors staying mum about who they’ll wear on Sunday. But Hardin didn’t see any reason to be secretive since she wore Zac Posen to last week’s ceremony and plans to do so again on Sunday, saying, “They were just the two most beautiful dresses I put on.”