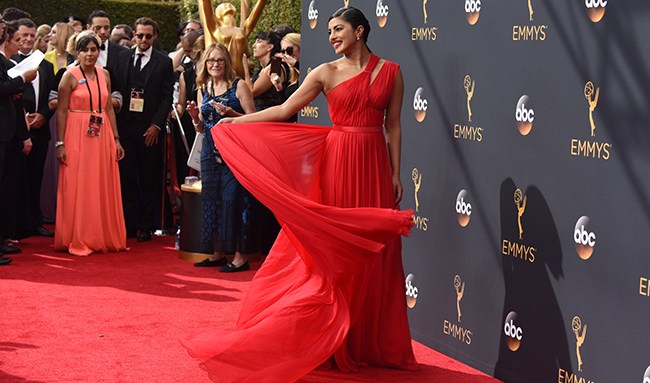 By now, we know the Emmy Awards drill: It’s hot outside. Celebrities sweat (they’re real people, too). Women feel like princesses in their safe, borrowed gowns. And men silently suffer in their tuxedos, happy that at least they’re not wearing corsets or stilettos.

This year’s most topical, and significant, themes proved much more interesting fodder for red carpet chatter and observation: the prevalence of diverse nominees (Hollywood is still smarting after the #OscarsSoWhite issue), diverse genders (call it the year of transgender) and ages (from teens and tweens like Yara Shahidi and Lily Chen to grand dames like Jane Fonda); and yes, some fashion risk-takers — see: Sarah Paulson’s sparkly green Prada dress).

Hari Nef, the transgender model and actress on Amazon’s Emmy-nominated show “Transparent,” epitomized the moment in a custom Gucci gown. “I love being on the show with all of these gorgeous trans women around me. We slay on the red carpet and we fight for our community. This probably sounds corny, but being surrounded by these chicks empowers me to continue because it can feel isolating sometimes when you’re out there like that.” Of her gown, she said, “I’m great friends with Alessandro [Michele]. They rock. They’re so supportive of me.” Gucci also dressed “Transparent” showrunner Jill Soloway and Nef’s mother Robin.

Nef also voiced what many actresses probably think. “I struggle with the red carpet, you know? I want to look pretty and sexy and all of that, but I dress for girls, not for guys. I try to find something that strikes a balance and Gucci is so good for that. It’s so appropriate, but also wrong. It’s so wrong, but it’s so right,” she said of her cherub-print gown. “It’s a classic red carpet silhouette with that grotesque Renaissance-y Alessandro twist.”

The most cheered-for actors on the red carpet were nominees Anthony Anderson, Taraji P. Henson and Tracee Ellis Ross. “You know it!” shouted Anderson as he fist-pumped his way down the carpet and gave a bear hug to fellow Best Actor nominee Jeffrey Tambor.

Designers still managed to make the most of their primetime marketing opportunities, with the New York contingent out in full force: Ross in Ralph Lauren, Michelle Dockery in Oscar de la Renta, Tatiana Maslany in Alexander Wang, Emily Robinson in Carolina Herrera and Priyanka Chopra in Jason Wu.

“We talked a lot about what I wanted to wear,” Chopra said. “I didn’t want to have to walk like I was a mummy. I feel free and chill,” she said of her crimson gown. “We felt red right from the beginning. Oh great, I look like a carpet,” she laughed when she realized she was blending in. At least she was having fun. “Somebody gave me tequila, so I don’t know what I’m saying. That always happens to me, even at the Oscars. I always end up getting tequila-fied.”

The red carpet also didn’t disappoint on eye candy, served up by veterans such as Heidi Klum and newbies like Emily Ratajkowski, who was there promoting her new Netflix show “Easy.” Ratajkowski and her date Zac Posen coordinated in navy. “She’s an artist. She’s a beauty. She’s a performer. I’m the luckiest guy here today. I love to be able to bring her,” Posen said. Ratajkowski echoed the love. “I’ve never been with such a gentleman before. He’s setting the bar very high. He introduces himself to every single person. He asks me if I need water. He picks up my dress. I adore him.”

Posen, a four-time Emmy attendee, offered this advice to Emmy-goers: “Enjoy yourself. Have fun. That’s the most important with any of these big events. Go and say hello to an artist you’ve always wanted to meet. You can fan-geek out. It’s OK.”