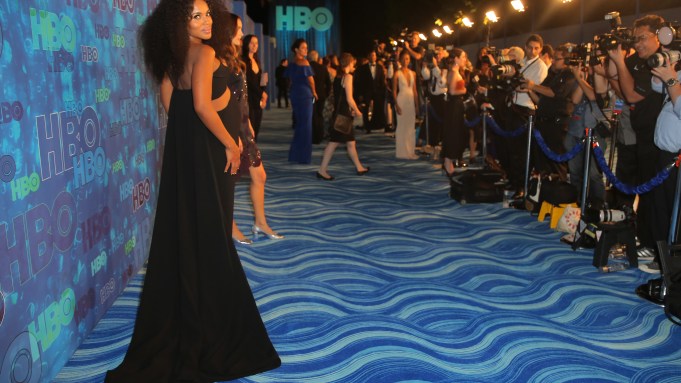 Larry David started a trend at HBO’s post-Emmy party. Hoping to go unnoticed, the “Curb Your Enthusiasm” star sidestepped the red carpet in favor of the noncelebrity entrance (yes, there are two separate ways into every party). Alas, he was caught.

“You’re on the wrong side,” called a reporter. As expected, the comedian didn’t miss a beat. “This is the right side to be on,” David said.

“I’m just so full of joy and pride for the whole show,” Clarke said, adding that she planned to celebrate “with Mr. Alcohol.” Even so, Clarke lamented that she wouldn’t be able to stay out too late since she had to get back to work in Belfast the following day. “Most of the time, I do try and have something to change into [for after the flight]. I wear pajamas on the plane. But tomorrow I don’t hold much hope.” She admitted her post-flight look will be a stark contrast from the Atelier Versace gown she was wearing. “Never look at pictures of famous people and think that’s how we get out of bed — cause it ain’t. There’s a lot of blood, sweat and tears that go into the look.”

Of working on “Game of Thrones” over the last several years, Clarke reflected, “We’ve had the cushiest job in TV because we’re always working. And now, I have to pay off some debts.” Meanwhile, the actress said she and her “GoT” character aren’t dissimilar. “We’ve fed each other in so many ways. She’s grown up and so have I. I just don’t have a dragon annoying me.”

Elsewhere, Kerry Washington greeted “Ballers” actress Jazmyn Simon with a hug. “You look like a statue yourself,” Washington told the newcomer. Of their red carpet camaraderie, Simon said, “We’re all family. I remember meeting Kerry this time last year without the baby bump. She looked phenomenal. She is baby goals all the way.” Washington’s “Confirmation” costar Zoe Lister-Jones echoed the sentiment. “Kerry actually hosted a party for the cast and crew of ‘Confirmation’ last night. She’s a marvel of a human. And to be pregnant and doing it all is a whole other level.”

Anthony Anderson attended with his daughter and mother. “It was a little disappointing,” he said of going home empty-handed (Jeffrey Tambor won the Emmy for a second year in a row). Still, Anderson said he was happy for the winners and felt lucky to be able to share the experience with his loved ones. “My mother put her dreams of being an actor on hold to raise an actor in me. I do what I do for her. She’s enjoying herself tonight. She’s having a ball.”

“Silicon Valley” actress Amanda Crew was eager to hit HBO’s famously elaborate buffet — despite being treated to one of the bags of cookies and peanut butter and jelly sandwiches that host Jimmy Kimmel had handed out during the ceremony. “It was actually a little stale,” Crew said. “They had to make 7,000 sandwiches and they started like a week ago. But the cookie was moist.” Despite the long day, Crew said the night was still young. “Once I get some food in me, I think I could last a while. But that stale sandwich didn’t take me too far.”

Once inside, guests were treated to a live band that performed songs like Justin Timberlake’s “Can’t Stop the Feeling” and Bon Jovi’s “It’s My Life” in addition to a fully stocked bar, massive dinner and dessert buffets, and extravagant decor that included an oversized fountain.

Winners John Travolta and Julia Louis-Dreyfus, who wore Carolina Herrera to the ceremony, clutched their hardware in separate corners of the room. John Mayer chatted with Katy Perry’s BFF Shannon Woodward, who attended in support of her upcoming HBO sci-fi thriller “Westworld.” Meanwhile, another Taylor Swift ex, Tom Hiddleston, posed with Michelle Dockery for photos as Chris Noth hit the bar while a few female admirers looked on.

After a whirlwind evening, what was Bryan Cranston’s favorite part of the night? “The ending!” he laughed.