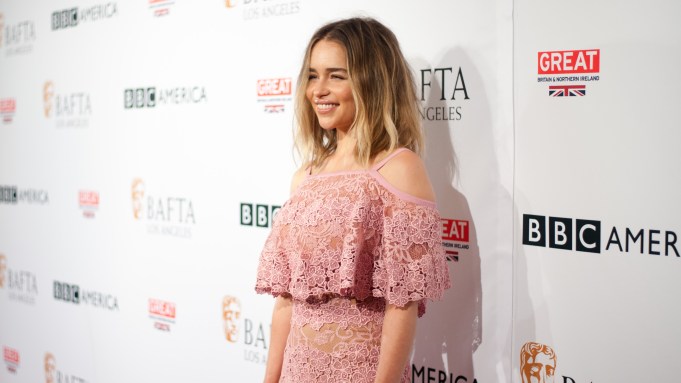 While Londoners enjoyed fashion week across the pond, America-based Brits got their tea party on at BAFTA Los Angeles’ annual Emmy event. Held at the London Hotel in West Hollywood on Saturday afternoon, Emilia Clarke was the very first to arrive. The “Game of Thrones” star beelined down the press line and straight into the party. Her costar (and fellow Emmy nominee — in the same Best Supporting Dramatic Actress category) Maisie Williams arrived later in the afternoon and patiently answered a few questions before heading inside to enjoy a cup of tea. “I’ve never been and I’m really excited,” she said. “I feel like it’s a very civilized, lovely atmosphere.”

The actress wore a tea party-appropriate dress by British designer Henry Holland while debuting fresh ink that she and her costar Sophie Turner got together. “That was the date I found out I got the part of ‘Game of Thrones,’” she said, revealing the numbers “07.08.09” on her left inner arm. “It’s the seventh of August. And not the eighth of July because in the U.K. we put our dates the other way around….It’s quite a prominent date for both of us. It’s the day both of our lives changed forever.”

Elsewhere, “Downton Abbey” costars Laura Carmichael and Joanne Froggatt kept close while continuing to make the party rounds together. “It’s been like a year,” Carmichael said of the last time she’d hung out with everyone prior to Emmy weekend. “But Michelle [Dockery] and I go for sushi quite regularly when we’re here.” During the party, the show’s creator Julian Fellowes teased the possibility of a feature film now that the series has concluded. Froggatt said she’d absolutely be on board. “I think it would be great,” she said. “I mean, I’d love to do it. I think everybody would….It’s just a little bit difficult getting everybody together at the same time because there’s a lot of people, and when you’re not contracted, everyone is off doing different jobs, and contracted to different things. So, that will be the difficulty, but I’m very hopeful that it will happen.”

Non-Brit Michael Kelly felt perfectly at home among the Londoners. “This last year, I spent just as much time there as I did here,” said the Best Supporting Dramatic Actor nominee and “House of Cards” star. “I did a period piece with Tom Hardy — a BBC production. We were shooting at these big grand estates that were built in the 1500’s.”

“Masters of Sex” actress Isabelle Fuhrman was also among the Anglophiles in attendance. “I actually lived in London for three summers at RADA. I took a few summer courses there. At the Royal Academy of Dramatic Art. It was very fancy,” she said. “It’s fun to speak in a British accent and I sometimes do it when I want to say something for added comedic effect. But at places like this I always feel like maybe my accent will be judged, so I try and refrain from it. I have conflicted emotions over faking a British accent at a British event.” One thing she was less conflicted about was the party spread. “Tea is my favorite thing to do. Most people my age go out at night. We like to go to tea in the morning. But this is a work tea.”

Meanwhile, RuPaul — who won at the Creative Arts Emmys last weekend — attended in a bright yellow suit by his longtime suitmaker Klein Epstein & Parker. “You want to make a splash,” he said. “You want everyone to say, ‘Guess who I saw at the tea party?’ Because this is a company town. We are all here to work!” Of his win, he said, “I’m still on a high. I still look over at the Emmy and I think, ‘Oh my goodness, I won it.’ It’s hard to believe.” Already having the award didn’t quite mean the reality television host and longtime icon was ready to relax. “I’m actually an introvert masquerading as an extrovert. I have to prepare for talking to people and pretending like I’m really nice. My natural state would be to be by myself, but it’s always good for me to get out.”