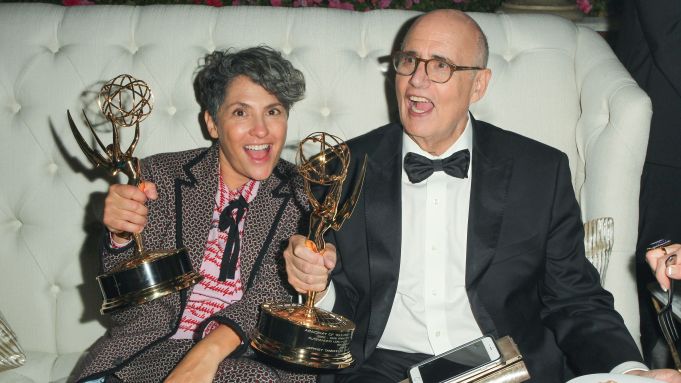 “Sometimes you see people win things and you go, ‘Really? Are you kidding?’” mused Judith Light on the Amazon step-and-repeat after the Emmys on Sunday evening. That wasn’t the case with the wins of Light’s “Transparent” colleagues Jill Soloway (Outstanding Directing for a Comedy Series) and Jeffrey Tambor (Outstanding Lead Actor in a Comedy Series). “[Their wins are] absolutely right. What’s so important is that their focus and their advocacy for the LGBTQ community, and particularly in this case the transgender community, is so true. Their advocacy is so real that they’re changing the culture.”

With these two wins under its belt, Amazon welcomed revelers into the Sunset Tower Hotel, where cast and crew from its shows “Fleabag,” “Transparent,” “Bosch” and “Catastrophe” danced in a photo booth and snacked on trays of shrimp, oysters, sushi, sliders and french fries, with waiters offering trays of milk and cookies and breakfast tacos in between.

Actress Hari Nef was feeling grateful about her role on “Transparent,” but planned to keep her gaiety in check. “I’ll knock a couple back, maybe try to do some tipsy networking,” Nef said. “I’d rather get someone’s email than dance all night.”

Gaby Hoffman had something else in mind. “I don’t know how long I’m going to last,” Hoffmann said, “But I’m going to go upstairs, put on jeans and boots, and start a dance party.”

Holding court at a corner table were Tambor and Soloway, each with Emmy statuettes in one hand, forkfuls of asparagus in the other. Later in the evening Soloway switched to french fries, which she hustled from a congratulatory passerby wielding a paper bag full. Outside and toward the back, “Real Housewife” Lisa Vanderpump had Jon Voight cornered at the bar.

Later and true to her word, Hoffmann had changed into a pair of Levi’s, and just before midnight could be seen getting down with “Transparent” costars Jay Duplass and Trace Lysette to Nelly’s “Hot in Herre” and Snoop Dogg’s “Drop It Like It’s Hot.”

As for how Bosch’s lead actor Titus Welliver would celebrate the evening? “I will not be drunk in every gutter in Hollywood tonight,” Welliver said. “I can assure you.”