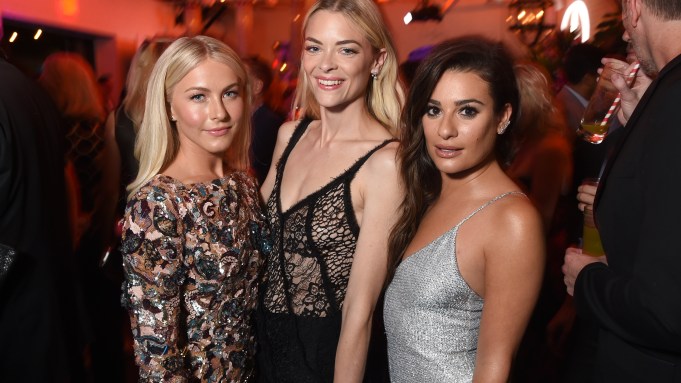 “I’m going to get there early because my dress has a huge train, so I’m going to be first on the carpet and then I’m going to get a drink,” declared Felicity Huffman of her Emmy-day plan. The “American Crime” star was at Women in Film and Variety’s pre-Emmy party on Friday night, a Mercedes-Benz and Rue La La-sponsored event at Gracias Madre in West Hollywood that drew Sarah Hyland, Julianne Hough, Ali Larter, Michelle Dockery, Sarah Paulson, Jill Soloway and Kate Walsh, among others.

Soloway had a similar philosophy though with a different approach. “I’m trying to reinvent my relationship to my privilege by being comfortable,” the Emmy nominee said of her Kenzo bomber jacket and sneakers. “When I go on the red carpet and go to these events, a lot of women that I meet are saying, ‘I can’t wait to go home and get my shoes off.’ But I’m dressed to enjoy myself and have a good time and treat it like an athletic event.” The “Transparent” showrunner attended with actress Michaela Watkins, who returns to the show next season in addition to starring on Hulu’s “Casual.” As the women made the rounds together, Soloway said, “Last year, I’d see Laverne Cox and she was getting in her car and going somewhere to change between every red carpet, but I’ll stick with the one thing.”

True to Soloway’s word, Cox donned a white asymmetrical dress before later switching into a blue pantsuit for the EntertainmentWeekly  party. “I’m just so grateful to be a woman working in Hollywood now and to be a working actor and to be here with my girlfriend,” Cox said, introducing Trace Lysette. “She’s on ‘Transparent.’ It’s great to be out as transwomen at a women’s event during Emmy weekend.”

Paulson, a nominee, attended with her best friend Amanda Peet. “I am her date,” Peet said. Paulson slipped inside, but Peet stuck around to tout her dress. “I’m wearing my friend,” she said of the frock designed by Rhei. “I kind of liked the Seventies blousy vibe and I think the print is so beautiful.” As for her Emmy nominated date, Peet said, “I’m trying to keep up with her and I’m also riding her coattails shamelessly. It’s been fun.”

Best Supporting Comedy Actress nominee Niecy Nash was happy to talk about her awards-day routine. “I want to lay out with my husband,” she said. “Drink some Champagne. Lay out a little longer. Slap some cream on my face to see if it’ll make me look any better. Put on Spanx and go on the red carpet.” Of her nomination, she said, “It’s special the second time around. I thought the first time was a fluke.”

“Silicon Valley” star Suzanne Cryer said that she’d been getting ready for her show’s nomination by going on a liquid diet. “I’m taking all my calories only in martinis, so that my dress, which is very tight, will fit,” she said.

Meanwhile, Rachel Bloom said, “I’m looking forward to the free things to eat and drink. Here’s the thing: the free stuff hasn’t gotten old. I want to encourage anyone planning an event out there: If you want to put doggy bags out at the end of these events, I will use one.”