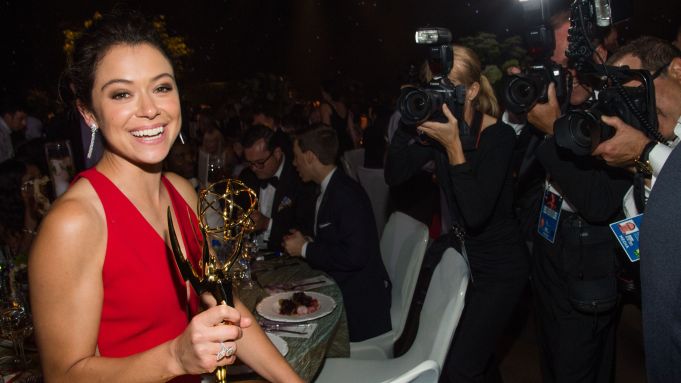 When “Game of Thrones” took the last award — for Outstanding Drama Series — at the 68th Primetime Emmys on Sunday night, it signaled the beginning of the party, and not just for Sophie Turner, Emilia Clarke, Maisie Williams, et al. It meant that the 1,000-plus guests at the awards show could finally get their food and drink on at the Governor’s Ball, held across the street from the Microsoft Theater in the Los Angeles Convention Center.

First stop for the “GoT” cast and crew was the media tent located between the two venues, to pose for winner photos and field questions from press. Inevitably, people wanted hints about next season.

When asked how she felt about the evening’s outcome, in which HBO tied FX with six Emmys, Clarke said, “Amazeballs is how I would sum it up.”

While all the evening’s winners gathered with Emmys in hand to take a “class of 2016,” some, like Aziz Ansari, nibbled on cookies or grabbed to-go cups of coffee. Others held out for the “turf and turf” entrée awaiting them at the Ball.

Rami Malek almost didn’t make it. When hearing that a few members of his posse were denied entry into the ticket-required affair, he said, “Forget it, I’m going to HBO.” His publicist convinced him otherwise, but before he left his friends he asked “Where is Jimmy’s party again?” Clearly the awards show host Jimmy Kimmel was hosting the most exclusive after party of the evening.

Malek then made his way up into the Ball on the heels of Keri Russell, who was barely standing in her gold stilettos. As she leaned on partner and “The Americans” costar Matthew Rhys for support, she politely declined a request to pose for more photos. “I’m so tired, and we’ve got to get home to our baby,” she said. “You’ve got to power through,” said her publicist as they walked in. Russell managed to turn back towards Malek to yell, “Congratulations!”

Inside the cavernous hall, which was decked out with a faux flagstone floor and heaps of orchids, Tatiana Maslany was still in shock after winning Outstanding Lead Actress for “Orphan Black.” “I haven’t really breathed yet,” she said.

She soon was engulfed by the crowd, which included “House of Cards” guest stars Paul Sparks and Joel Kinnaman bro-ing out, James Corden obliging kids with selfies, and even Latin songstress Charo making the rounds.

After she got her Emmy personalized at the engraving station, Sarah Paulson also took a moment to pose with some non-actor winners. Everywhere one turned, there were people holding – or rather, wielding – the pointy statues. Ryan Murphy warned one friend who came in for a hug, “Don’t spike yourself with it.”