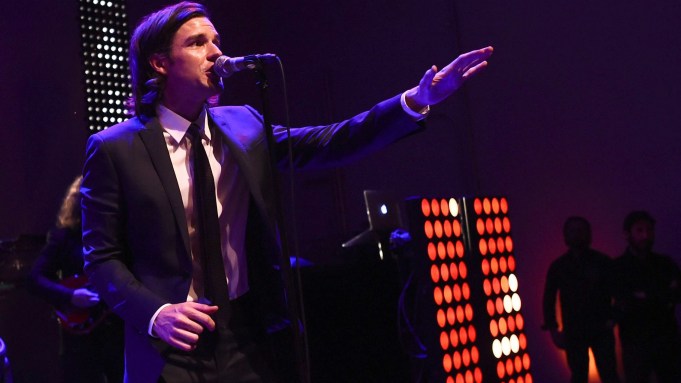 For those who didn’t have concert fatigue after Saint Laurent’s 11-band marathon after party on Wednesday — or maybe they simply never went home? — Emporio Armani on Thursday hosted a music event of a slightly different kind, next door to The Hollywood Palladium at Neuehouse. Timed as a celebration of its new Rodeo Drive store, the Los Angeles installment of the Emporio Armani Sounds series, held in Studio A of the former CBS Studios building, featured a six-song set by Brandon Flowers and a dance party DJ’d by Mark Ronson.

Ronson, who’s nominated for three Grammy Awards including Record of the Year for “Uptown Funk,” was nervous despite having gone down the nominee road before. “I wish someone could just tell me if we’ve won or lost. I was wondering why they don’t just announce one day, ‘This is who won,’ but I guess it’s the atmosphere of everyone waiting around to see who won, that works.” (That, and a televised awards show on Monday.)

On balancing his DJ and producing careers, he said, “I guess it’s something I got used to over the years. Even before I made any records, I was always DJing at clubs in New York five nights a week then going in the studio the next day with singers or rappers.” So when does he sleep? “You nap.”