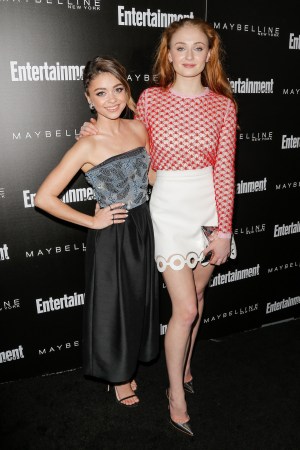 Entertainment Weekly’s annual pre-SAG Awards party on Friday night seemed more like a high school reunion as the actors nominated for Outstanding Performance by a Cast in various films and television shows had a chance to reconnect. “This crazy guy,” Aldis Hodge said in excitement as he bumped into his “Straight Outta Compton” costar Neil Brown Jr. on his way inside Chateau Marmont. “What’s happening, brother? You look sharp!” “Off the rack,” Brown replied.

The two were clearly enjoying their first nominations for the much-lauded film. “It’s my first SAG party. My first SAG nomination. I’m just sitting back trying to enjoy it,” said Hodge.

Young “Game of Thrones” star Sophie Turner was ready to tuck into the food, though at 19 she’s too young to partake in the cocktails. “I eat wherever food is served. So if there is good food here, I’ll be eating it,” she said. After sustenance, her main goal was to dance. “That’s the main reason I come to these kinds of things. I come for the boogie-ing rather than the socializing. I just want to dance with my friends,” she said, referring to castmates such as Maisie Williams.

Nearby, other guests like Priyanka Chopra and Sarah Hyland sampled Maybelline freebies and had “lipsology” readings, equivalent to a palm reading for a lip print. Perhaps they were trying to divine the winners for the awards show.

“To be perfectly honest with you, I’m really hoping that we win,” Sola Bamis said of “Mad Men’s”’ nomination.

Laura Prepon, on the other hand, was a bit more cautious. “If we win, if we win,” she shrugged in response to her “Orange Is the New Black” costars’ encouragements to prepare a speech.

Perhaps the OITNB cast was just hedging their bets. Said Samira Wiley, “My cast won last year, but this is actually my first time attending, so I’m really excited. I love firsts.”