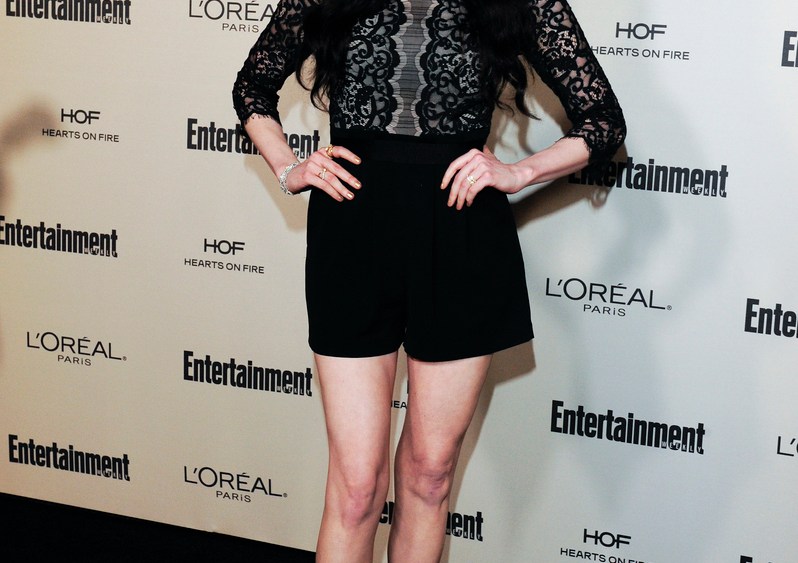 At Entertainment Weekly’s annual pre-Emmy bash at West Hollywood’s Fig & Olive on Friday night, stars like Jane Krakowski, Paul Dano, Gaby Hoffmann and Uzo Aduba flew under the radar while the new “The Daily Show” host Trevor Noah made his West Coast red-carpet debut. The comedian is still warming up to the attention. “It’s a strange thing to say, being in this world, but I’m a fairly shy person. I do my job and I enjoy doing it, but I’m not particularly a fan of being in the spotlight per se. Jon Stewart said to me, ‘Always trust your discomfort. If it feels like you shouldn’t be doing it, you probably should be doing it,'” he said. “So you smile for the pictures and have a good time and then hope that no one judges you for how you dressed.”

Elsewhere, pretty women in pretty ensembles discussed just that. Laura Prepon said she plans to wear Christian Siriano to Sunday’s ceremony. “I always love a train. Any chance I can wear a train, I wear train,” said the “Orange Is the New Black” star, whose show is nominated for outstanding drama.

Sarah Paulson, nominated for her work on “American Horror Story,” debated the proper way to pose. “I was like, ‘Should I Angelina Jolie it and do this on the carpet and make sure that everyone realizes it’s pants?’” she said, jutting her leg out for emphasis. She said the look differed greatly from her Emmy dress, which would be “sparkly.”

Padma Lakshmi discussed her “classic” Emmy dress, noting, “It’s chartreuse.” The host, whose show “Top Chef” is up for its ninth nomination, added, “I just got off the plane a couple of hours ago, and I’ll be leaving on Monday. Either with a gold statue or without one.”

Newcomer Rhea Seehorn of “Better Call Saul” was attempting to take the moment in. “I’m appreciative to be an actor who’s employed. End of story,” she said, though she did have one hesitation. “I wish there was a separate red carpet for character actors, like in the back, where nobody says you have to pose.”

Others proved just as eager to watch all the action unfold from afar. “UnReal” actress Constance Zimmer, whose “Newsroom” co-star Jeff Daniels is nominated, couldn’t wait to watch the show with her young daughter. “She loves watching the red carpet and looking at all the dresses,” she said. “The craziest thing is she’ll see people she’s met and she’ll be like, ‘Mommy! That’s the guy that you were on a show with. He’s nominated for an Emmy!’ She’ll get so excited. It’s fun to be with her and not have to worry about makeup and hair and what am I wearing.”