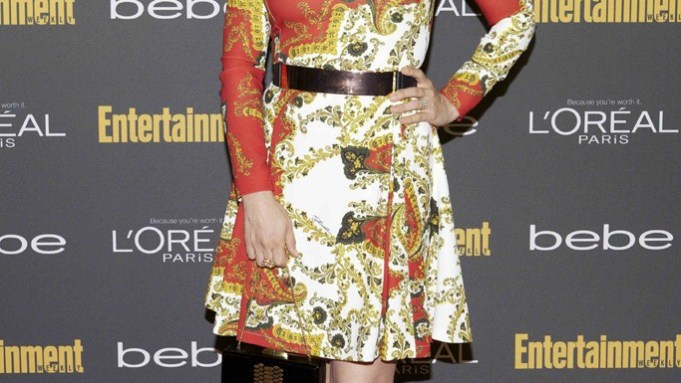 STICKING WITH TRADITION: For most attendees of Entertainment Weekly’s pre-party, the event has become an Emmy weekend tradition. Presented by Bebe and L’Oréal Paris and held at West Hollywood’s Fig & Olive on Friday night, this year’s celebration attracted nominees like Michelle Dockery, Connie Britton, Linda Cardellini, and Anna Chlumsky, as well as Sunday’s host, Neil Patrick Harris. Before the room filled up, he sipped a cocktail while hanging with husband David Burtka. However, for Harris’ new “How I Met Your Mother” co-star Cristin Milioti, the event was virgin territory.

“This is my first Emmys party ever,” said Milioti, who stars as the much-anticipated “mother” in the final season of the show. “I’m just in it for the dresses,” she joked of attending.

Perennial winners like Julie Bowen and the “Modern Family” cast kept close to one another inside the intimate, but packed room — though their 14-year-old co-star Nolan Gould had a bone to pick with his on-screen uncle. “Jesse Tyler Ferguson stole my tux. There’s usually not this much competition [for the guys], but I’m coming into men’s sizes now — and me and Jesse have really similar taste in clothing. I think it’s going to start to get aggressive on the set. We’re going to have full-on cat fights,” he joked.

Kristin Chenoweth and Zac Posen shared a chat and a high five on their way inside the party, Jessica Pare signed autographs for fans who’d congregated across the street, Raquel Welch mingled with Ashlee Simpson and Jennifer Morrison and her “Once Upon a Time” co-star Jamie Chung caught up near the bar. “Honestly, I have no right to be here,” said Chung, looking around the plush yellow-and-red-lit room. “I’m on a couple shows, but really it’s all about the people that are nominated. It’s time for me to geek out and to be in the same room as all these fantastic actors. I’m here totally for personal selfish reasons.”

For Beth Behrs — who caught up with Kaley Cuoco — the party was familiar ground. “I got a warm-up before doing ‘Two Broke Girls,’” she said. “My boyfriend [Michael Gladis] had been on ‘Mad Men’ for years and I’d gotten ‘Two Broke Girls’ after we’d started dating, so I would go with him to different events whenever the show was nominated.”

Oscar winner Marcia Gay Harden, who has been twice nominated at the Emmys, said the pre-parties are always the highlight. “There’s a levity about tonight,” noted the “Newsroom” star. “Everyone’s feeling good. I always like the moment before the awards. It feels like everybody is on deck, on the ship, and rooting for each other. The moment of the win separates people in some weird way. I personally love these moments.”