Christopher Kane and Natalie Massenet were among guests. 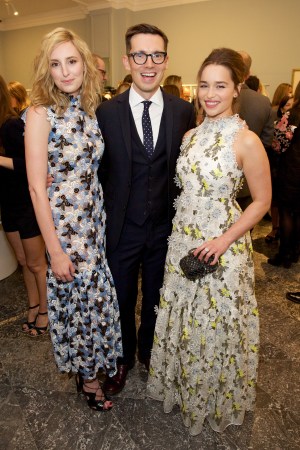 DOWN SOUTH: He may still be a young man, but Erdem Moralioglu is clearly an old soul, marking his first store opening with a dinner at grand old Thomas Goode in London.

“I bet it’s rare that you have dinner surrounded by so many porcelain plates. Very posh, isn’t it?” said the designer, referring to the venue, Thomas Goode, the legendary tableware shop and a supplier to the British royal household.

Clusters of purple blooms and mint leaves — along with personal notes from the designer — awaited guests as they arrived at their tables.

Earlier that evening, he cut the ribbon on his first store — a 2,000-square-foot space across the street from Thomas Goode — on the site of the former antique rug dealer C. John. The designer said the place hadn’t been touched for decades, and the renovations involved removing asbestos and fixing a leaky ceiling.

Erdem isn’t stopping with London: Plans for a New York store are already in the works, although the designer declined to reveal any details.

Kane, who shared a house on Mykonos this summer with Moralioglu, said their nights were happily low-key. “Sometimes it’s nice just to stay at home,” said the designer, who opened his own shop on nearby Mount Street in February.

Those lazy summer days and nights are well over — for everyone. Guests at the party talked about autumn plans, with Carmichael set to promote her latest film, “Burn, Burn, Burn” at the London Film Festival next month, and fighting bouts of nostalgia following the wrap-up of “Downton Abbey.” “We all still miss each other and see each other all the time,” she said.

Knitwear designer de Lussy, meanwhile, is planning a project at Somerset House in October where customers will be able to create their own knit designs using the latest technology. “For the moment, though, I’m spending my time crocheting — crazy things for interiors, pieces that have little to do with the real world,” she said.