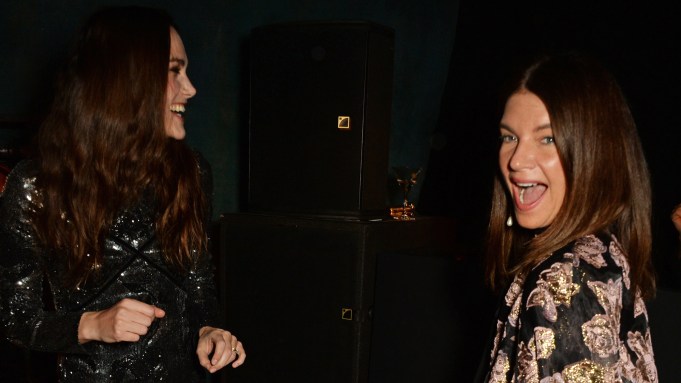 LONDON — Erdem Moralioglu recruited the talents of installation and production designer Robin Brown to design the surreal Art Deco scene of his show’s after party at the Old Selfridges Hotel, where his fall show took place earlier in the day.

It was like stepping onto the haunted set of an old Hollywood backlot. A giant polar bear was shrouded in muslin, a giant parasol shaded a velvet love seat and huge roses sprouted next to trellised archways.

“I wanted people to be able to be a part of the show’s set at the party,” said Moralioglu, whose mind was already on another project. The designer has collaborated with auction house Sotheby’s to select ten pieces of contemporary art as part of the 205 lots in the Contemporary Curated sale, taking place on March 15 at Sotheby’s in London.

Moralioglu was first on the dance floor with chum Keira Knightley and Natalie Massenet, who bopped to tracks spun by Knightley’s husband, James Righton, which ran the gamut from classics like The Supremes’ “You Can’t Hurry Love” to Beyoncé’s “Single Ladies.”

Singer Caroline Vreeland, who had been doing the rounds of London shows, was questioning British politeness. “What is up with everyone asking me how my day was? What’s that all about?” She pondered. “In L.A., we just go with ‘wassup?'” She was looking forward to her next inking, to add to her collection of several tattoos on her arms and on the nape of her neck, one reading “I do not struggle in your net because it was my aim to be caught.” “Most of them are by Dr. Woo. He is the most talented tattoo artist in L.A. — everyone should follow him on Instagram — and he’ll be in Paris when I’m there,” she related. “I am going to get ‘Please touch here’ just here on my upper thigh. It’s like my personal hashtag. I know it’s a bit weird to get a tattoo on your leg but that’s where it’s going.”