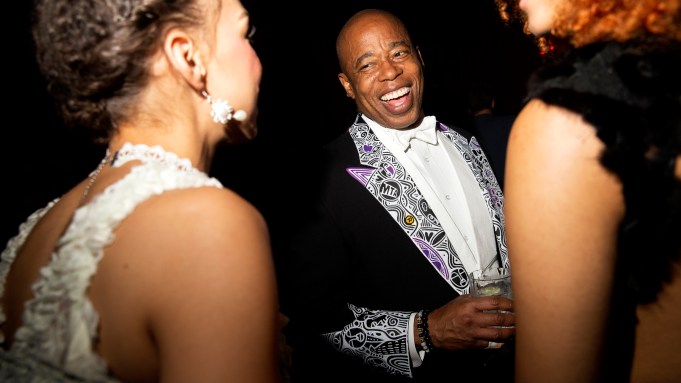 Other fashion forces, like the Metropolitan Museum of Art’s Andrew Bolton, Instagram’s Eva Chen, YouTube’s Derek Blasberg, Moda Operandi’s Lauren Saint Somingo, Carolina Herrera’s Emilie Rubinfeld and Linda Fargo were also in the mix. Adams boomed, “You are the exclamation point of New York. They say if you look good, you feel good so we know we feel good tonight, because you all look so good.”

Gordon introduced the mayor by sharing his own made in New York story, recalling how a young man had once asked for advice about a necktie purchase, and he then he gifted the stranger three more ties through a salesperson.

Adams told his designer guests that their business was much more than fashion. Wedding dresses, neckties for job interviews, wardrobe refreshers for domestic violence victims and children in homeless shelters all can lead to life-defining moments, he said. Noting how a designer relayed the mayor’s message of wanting to end gun violence, Adams said, “You are the signatures of who we are as a city. I can’t thank you enough. You grace Gracie Mansion with your presence.”

Adams singled out one of the evening’s cohosts, Condé Nast’s Anna Wintour, as “the angel who wears Prada,” citing her “remarkable” love for the city.

“All of a sudden the mayor comes in and says he’s a nightlife mayor,” and he knows and appreciates style, Adams said. “New York is back. We are alive. We’re going to bring that artistic energy that we are known for and the diversity of this city. This fashion week we are going to move about and know that you are a $600 million juggernaut — just in this week alone. That is twice the amount if we were to have a Super Bowl here. You bring [a stronger] economy to the city — 100,000 employees, $100 million in tax revenue.”

Without a doubt, New York has always been a center for creativity and for commerce, and fashion qualifies on both fronts as well as providing a significant employment, according to Kors. Having the mayor rally the troops to remind everyone of the strength of New York and American fashion makes Adams “a great flag waver,” Kors said.

In the wake of the past two years, the pandemic shutdown and the Russian invasion of Ukraine, such a vote of confidence carries more weight. “For a lot of people the world can feel very negative on a daily basis. I always joke that some people think I’m Pollyanna always running around like everything’s hunky dory. I think the world needs positivity. It’s important and it’s actually New York,” Kors said.

Despite that, a lot of people got down on the city or left, but Kors said he is “excited to see the amount of young people moving back or moving here for the first time. That reminds me of when I first came here. They’re juiced. They’re excited and entrepreneurial — all of the good things.”

Wearing identical ivory-colored suits, Tanner Fletcher’s Tanner Richie and Fletcher Kassel fit that bill. Surprised to hear about the fashion industry’s financial might from the mayor, Kassel said the chance to be in the same room as Gordon, Wintour and Santo Domingo was “extremely beneficial” from a business perspective. Richie noted what an integral part of the city the garment district is with more brands relying on it especially during the pandemic, when overseas production was no longer an option for many. “I feel that we need to get a lot of the manufacturing back to New York to support the city and also for sustainability. There’s talent here so why aren’t we using it?”

Hilfiger summed up the scene as, “Everyone is honored to be part of this event.” And Rowley seconded that, noting how Adams opened up Gracie Mansion in the name of fashion in the midst of the United Nations General Assembly, multiple art fairs and the U.S. Open.

All the togetherness after 18 months of much at-home time took some getting used to for some. Wearing a few necklaces including one with a sparkly “I’m in charge” pendant, Von Furstenberg mentioned in conversation outdoors on a patio that she was no longer greeting people with kisses. She wasn’t the only COVID-19-adverse person in the rotation. Standing shoulder-to-shoulder indoors, one guest surmised the collective denial.

As the elder statesman of the industry, whose fashion career started in the ’50s, Stan Herman wasn’t just impressed by Adams’ astrological sign of a Virgo. “They’re workers, They’re diligent, they love being out front, but they know how to do things in the back room as well. There was a poetry part to what was said.]. The mayor has a lot of expectations. He talks about the future. He doesn’t talk about the past. It’s a very positive attitude. I feel good about the industry right now. Walking around the city today I suddenly saw a light again. It’s beginning to happen.”

Cornejo is also seeing glimmers with online sales strengthening and more walk-in shoppers in her downtown store more than any time in the past two and a half years. “The city’s back. There are a lot of tourists and everyone’s here for the art fairs from Europe. The thing about America and New York is it is optimistic. We keep going. And Europe is looking quite bleak [financially.] There are a lot of Europeans showing here this season.”

In recent seasons, there has been a steady return to live shows and events, Kolb said. “It speaks to creative expression and human nature to want to be out and about. That is reflective of CFDA members, young designers, established designers, international designers — we have three this season. Also, 20 percent of the brands are led by designers of color.”

Wiederhoft needed no convincing about the importance of Thursday’s major meet-up. Having started his company three years ago, the opportunity to be invited to Gracie Mansion was not something he was about to miss even though his first runway show is Wednesday. “My mother and my grandmother are both New Yorkers and Italian Americans. Like most designers, it’s not just [about] dresses and fancy sparkled things. This is an industry. We support each other. We support local garment makers. We support set designers and lighting people. To be part of that community that brings not only beauty but also a true economical force is really cool,” he said.

Black Boy Knits founder Agbobly agreed, as he knows a lot of people in the industry but had yet to be in the same room with some of them. “This is important to start strengthening the community of designers, who are new to fashion. By meeting people face-to-face for the first time, you can start to build a relationship.”

Adams is on board with hosting more meet-and-greet events at Gracie Mansion, assuring the guests in his closing remarks that the event would be an annual one for as long as he is mayor. With that, he worked the packed room, shaking hands, posing for selfies and making the rounds with the designers. So much so, that one member of his security team seemed to lose sight of him — but only momentarily. “We got him,” he said confidently.