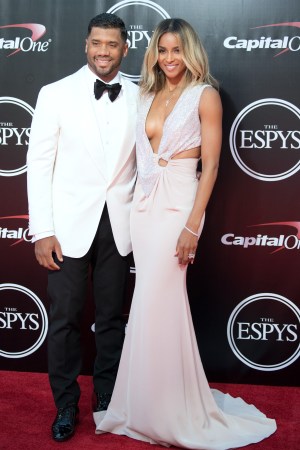 Plenty of others, like last year’s honoree Caitlyn Jenner, beat the heat by skipping the carpet altogether. “I’m very excited about being back,” Jenner told ESPN backstage. Her daughter Kendall Jenner opted not to accompany her rumored beau Jordan Clarkson, who hit the red carpet solo in a pin-striped suit. Often referred to as the “Oscars of sports,” the show is broadcast live on ABC and honors individuals and teams for their outstanding achievement in sports as voted on by fans.

The night was emceed by WWE star John Cena, following his roles in high-profile films like “Trainwreck” and “Sisters.” “He has a personality as big as the world,” said his colleague Danielle Moinet, who goes by Summer Rae in the ring. “It’s huge for WWE and it’s huge for his brand personally. He’s the nicest guy.” The wrestler — who said she recently caught the acting bug herself — wore a black cutout dress by Bao Tranchi. “I saw she designed for Gigi Hadid recently. She sent some pieces over to my stylist. I’m honored to be able to wear her. She’s killing it.”

“I think I’ve used a curling iron more in the past 24 hours than I have in the past two years,” laughed cyclist Allysa Seely, who is headed to the Paralympics in Rio de Janeiro later this summer. Nominee Ryan Dungey proved equally new to the red carpet. “What’s this suit? Ted something?” the motocross racer asked before being told it was by Ted Baker. “My wife helped pick it out for me. My style is OK, but hers is better.”

Most were just eager to get off the carpet and head inside. “I’m sweating my ass off,” said Indiana Pacers star Myles Turner. “I’m struggling,” agreed Andre Drummond of the Detroit Pistons. “I’m trying to move as much as I can to get a little breeze.”