Essence Magazine upped the ante this year by partnering with OWN: The Oprah Winfrey Network for a prime time broadcast. 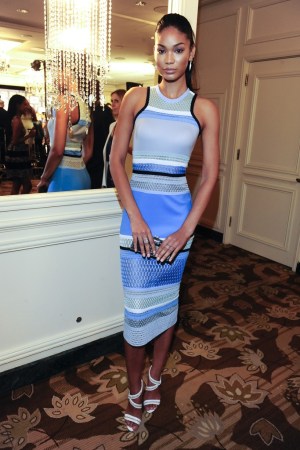 For its eighth annual Black Women in Hollywood Awards luncheon on Thursday, Essence Magazine upped the ante by partnering with OWN: The Oprah Winfrey Network for a prime time broadcast.

That was one sure way to make sure Winfrey herself showed up, and she even came early and doled out hugs to photographers backstage. After a brief pause to allow guests to eat lunch off-camera, Oscar winner Lupita Nyong’o, fresh off the set of “Star Wars: Episode VII — The Force Awakens,” presented the Vanguard Award to the ubiquitous “Orange Is The New Black” cast members Adrienne C. Moore, Danielle Brooks, Laverne Cox, Lorraine Toussaint, Samira Wiley, Uzo Aduba and Vicky Jeudy. “It’s really challenging to be a blacktress,” said Brooks. “There are not a lot of roles for us. We’ve all been told we’re too tall, too fat, too black, not women enough,” she said. “I’ve learned we’re right the way we are, and I hope we continue to inspire people.”

Before receiving the Breakthrough of the Year Award, British actress Gugu Mbatha-Raw said, “I think I always felt, ‘Black Women in Hollywood,’ do I even qualify to be here?” Clearly, it was a rhetorical question, for she added, “What [the recognition] gave me was a sense of letting go of the fears that stop us from doing what we want to do. To be embraced so joyously means so much to me.” Also picking up statuettes were Academy Award-nominated costume designer Ruth E. Carter and actress Regina King, who seemed stunned to have been working for three decades. “Has it been 30 years? But I’m only 32,” joked the 44 year old. “I’ve worked with half the room, and the rest are my friends.”

“This is probably the best event,” said “Selma” director Ava DuVernay. “I’ve been in a lot of fancy rooms…and this is my favorite.”

Closing the ceremony on a high note, John Legend had the ballroom full of women swooning during a performance of “All of Me.” Fittingly, he was later joined by Common for a performance of their Oscar-nominated song “Glory.”