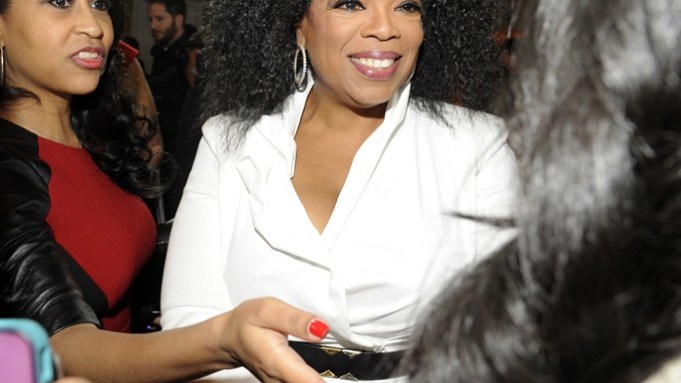 Honorees at Essence magazine’s sixth annual Black Women in Hollywood luncheon recounted their successes and struggles for a midday crowd at The Beverly Hills Hotel on Tuesday.

“There is nothing better than being honored by your own,” said Oprah Winfrey.

Winfrey brought nine graduates from her school in South Africa, the Oprah Winfrey Leadership Academy for Girls, who shared the spotlight with her as she received the Power Award. Alfre Woodard, Gabrielle Union, Mara Brock Akil, Naomie Harris and Quvenzhané Wallis were also honored.

Union, wearing a bold green vintage Versace dress, said her career has been a journey and an evolution.
“I was my own setback, my ego and my pride…once I got over myself, I learned to strut a little bit tougher,” the actress said.

Naomi Campbell, Kelly Rowland, Jill Scott, David Oyelowo, Meagan Good, Mehcad Brooks and Blair Underwood were among those on hand to show their support. The luncheon featured a performance from singer Miguel. Presenter Common surprised the crowd with an impromptu freestyle rap after a minor technical difficulty.

“It’s amazing and beautiful women, and people I have so much respect for,” said Campbell.

Former Essence honoree Loretta Devine believed Hollywood has changed over the last 40 years with actresses like Kerry Washington holding the lead in “Scandal.”