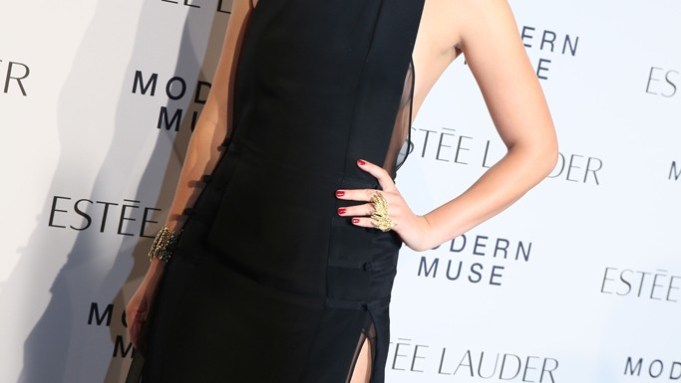 Estée Lauder collected an eclectic group of Hollywood and fashion names, posing as muses, at the Guggenheim Museum Thursday night, to promote the upcoming launch of its new women’s fragrance, Modern Muse.

“To me, a muse is someone who makes you work harder,” said Drew Barrymore, in a Marc Jacobs dress (having just come from his runway show) and her mother-in-law Coco Kopelman’s Chanel jacket.

For her, that overall muse is her mother-in-law. “Just because of the human being she is.” The actress reveled in the fact that Jacobs had mixed patterns galore in his spring show. Barrymore said, “I love mixing patterns. And it will give me a good argument to my husband [Will Kopelman] for when he’s like, ‘Whoa, that’s a lot of pattern mixing.’ I’ll be able to point to this and say, ‘Look! It’s OK!’”

“That’s my muse there, Linda Johnson,” said Leonard Lauder, chairman emeritus of the Estée Lauder Cos. Inc., pointing to his fiancée. He noted that he is engaged, but did not mention a wedding date. Of Modern Muse, he said, “I think it’s the best fragrance we’ve done in memory. It’s a gorgeous fragrance, and it’s going to be a long-term success. It’s going to be one of our classics, because once you smell it, you’re hooked on it.”

Maggie Gyllenhaal, wearing vintage Yves Saint Laurent, was clearly channeling her muses as she eagerly discussed her latest project. “I’m making a BBC series called ‘The Honorable Woman,’ and it’s the thing I’m most proud of that I’ve ever worked on in my life. It’s a seven-part series about a woman whose father was a Zionist gun runner. She inherits his company and basically subverts what he was doing and starts laying communication cable — like for the Internet and telephones — between Israel and Palestine. But she’s also like f–king people in the back of taxi cabs and watched her father be killed in front of her. She’s a big mess and at the same time really trying to do something honorable and incredibly difficult. And because it’s Israel and Palestine and she’s English, it ends up pulling in the mix MI6 and CIA and there are kidnappings and murders, but it’s basically about this woman who’s both deeply, deeply flawed and really trying to be honorable.”

Gyllenhaal took a break from filming to spend time with her family, actor Peter Sarsgaard and the couple’s two daughters, Ramona and Gloria. “At this point, the things that help draw me to a project are that they’ll let me leave for four weeks and get my daughter [Ramona] into second grade,” she said. She’s also planning to do a Sam Gold play, “The Village Bike,” next spring.

Like many actresses before her, Gyllenhaal also didn’t discount the possibility of getting involved with the beauty world. “One of the things that’s most interesting about that [beauty ads] for actors is that it’s being inside of a piece of art. If the campaign is beautiful, then you’re actually making a piece of art with someone.”

“There are certain things in your career that you manage, and others that you create,” said Jane Hudis, global brand president of the Estée Lauder brand, in a black Lanvin cocktail dress. “I created this and feel like a sculptor, an artist. It’s very big and very close to my heart. We’re just now rolling the products into the stores, and it’s doing quite nicely. Of all the things I’ve done in my career, this feels the most important and significant and personal to me.”

Iman, who dazzled in purple Zac Posen, ruefully noted that the designer fit the dress on Pat Cleveland’s 17-year-old daughter. But while she might have the body of a teenager, other parts are considerably older, like her knees. “Trust me.”

“A muse is somebody that can inspire change, who has inspiration for the future but is rooted in the great things of the past, ” said Fabrizio Freda, president and chief executive officer of the Estée Lauder Cos., who named two muses: Hudis and his wife Marianne.

Tom Pecheux, who grabbed a nap after keying the makeup at Ralph Lauren’s Thursday morning runway show, accompanied Mary-Kate and Ashley Olsen. While the twins shied away from the press, Pecheux spoke of the inspiration his recent trip to the American Southwest gave him. But it wasn’t without drama: “For the first time in my life, I got stopped in Marfa [Tex.] by the border police,” he said. “And it was the most scary thing in the world. They were like, ‘Passport, where are you from, what are you doing so close to the Mexican border?’ I said, ‘I’m drug-free sir! And I’m too blue-eyed to be Mexican.’”