The brands held an intimate dinner in Paris on Saturday night. 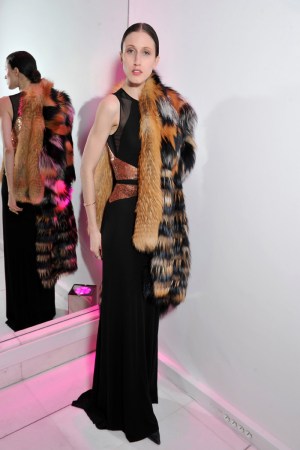 COLORS THAT POP: Courrège’s Sixties-style headquarters on Paris’ Rue François Premier was the setting for an intimate dinner Saturday night to celebrate the fashion brand’s makeup tie-in with the Estée Lauder Cos.
Kendall Jenner, wearing a blue mini Courrèges number, had visited the inside of Notre Dame cathedral for the first time the prior day.

She enjoys sightseeing and chilling while in Paris. “I go to sushi literally every night, because I’m like obsessed with sushi,” said Jenner. “I found this one great place here — it’s called Kinugawa. It’s so amazing. And I go to L’Avenue for lunch every day. So it’s just kind of my daily routine when I have the time off.”

She added: “When you are dressed in a Sixties way… you feel stronger because you have to assume your outfit and makeup.”

The Webster’s Laure Heriard Dubreuil adores her pair of vintage Courrèges boots. For fashion of yesteryear, she especially loves to shop at C. Madeleine’s, which is organized by decade, in Miami Beach.

Jewelry designer Noor Fares owns some vintage Courrèges pieces. She was in town to show her collection during Paris Fashion Week and will introduce a new line next couture season.

“It’s going to be the first time that I present unique pieces of higher jewelry,” she said, explaining the designs will continue to integrate her talisman theme.

Betony Vernon is preparing a new jewelry collection, due out in September. And her steamy tome, “The Boudoir Bible,” will be released in Russian in the next couple of months. “The English version has been reprinted by Rizzoli,” she added.

John Demsey, group president of the Estée Lauder Cos., discussed synergies between Lauder and Courrèges.

“The Estée Lauder brand launched in France in the mid-1960s, and Estée Lauder wore Courrèges. Leonard and Evelyn Lauder were huge fans of Courregès,” he said, explaining that when he was introduced to the brand’s new owners, he thought: “‘What an amazing opportunity to do a collaboration with amazing French and American heritage brands.’ And little did we know that we were on a total Sixties vibe moment, in terms of makeup and fashion. And the rest is history.”

The colors appearing in the 13-unit makeup line, just out, are linked to hues used in the fashion label’s winter and summer collections.

“It’s a limited edition for the moment, but with John we believe it might be the beginning of a great adventure together,” said Jacques Bungert, a co-owner of Courrèges.

Up next for the label is a new women’s scent, called La Fille de L’Air, which will be introduced exclusively on Air France flights in June prior to a wider international rollout.

Other guests at the event included Solange Knowles, Joan Smalls and Anna Cleveland.